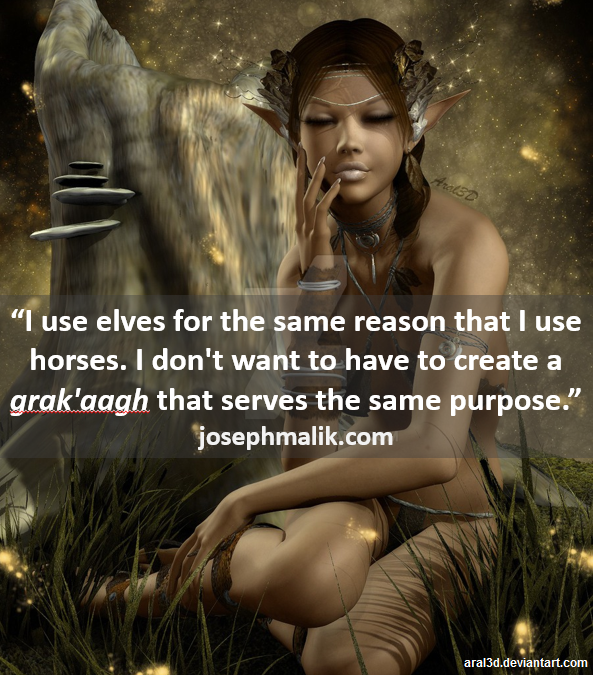 So, we were talking elves over on Mythic Scribes. Talk of elves always brings up talk of cliches.

Cliches fuel fantasy, particularly the pulp fantasy market. It is possible — and apparently lucrative — to take a bunch of fantasy cliches, and hammer them together into a story, and publish it. Here, I’ll help. Ready? Write this down:

A farmboy’s family is slaughtered by orcs who burn down his village. He escapes with his life and runs off into the forest where meets an elf and a dwarf who hate each other but are traveling together. The boy finds a magic sword that makes him awesome, and the elf tells him that he’s a lost prince, because the elf knows that only the lost prince can wield that sword. They get in adventures and all become friends, and in the end they defeat an evil sorcerer who controls the orcs, fulfilling a prophecy that you quoted before the prologue. The end.

Some readers, and many authors, hate elves. (The only thing I hate more than elves are lost princes. Somebody find the goddamn prince, already.)

Frankly, when I see elves in a book, I roll my eyes. I hate elves for the same reason that most people hate elves: they’re overdone, and worse, they’re badly done most of the time. Typically, they’re pretty humans who are awesome at everything and have pointy ears. But they talk like humans, they think like humans, they act like humans, only awesomer. They’re the tried and true Mary Sue characters of fantasy. Aside, of course, from the lost prince with the magical sword of awesomeness.

Personally, I use elves for the same reason that I use horses. I don’t want to have to create a grak’aagh that serves the same purpose. There’s no point and I don’t have that kind of time.

But that brings us to the purpose of elves. 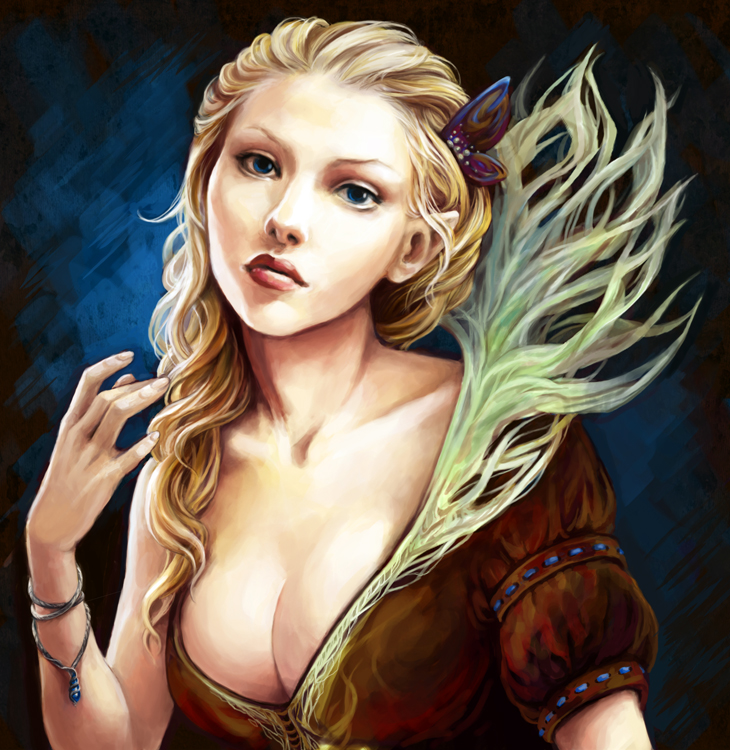 Where do your elves fit in and what do they bring to the story? Besides awesome elf-boobs.

In my worldbuilding I drew a dotted line between elves and their relationships with humans and the way we humans relate to a really good dog. See it from the dog’s perspective: the dog doesn’t entirely understand what we’re up to, but we have the best stuff and we’re always getting in crazy adventures, going to far-off places and working with magic to change the world around us (see a flashlight from a dog’s perspective) and make things go our way. The dog’s willingness to throw itself recklessly at danger that it doesn’t understand and give up its life for its pack is something that we (generally) don’t possess but we hold in tremendous value, which is why we bring them into our family and allow them to see us as their pack. To us, their simplicity is entertaining and they remind us of the joys in simple things, like rolling in the grass or lying in the sun or standing up to danger. We bond closely with them and we miss the hell out of them when they’re gone.

To my elves, we humans are pretty much that simple. Our concepts of philosophy and strategic thinking are a dog nosing at a ball to get the cookie out. My humans from Earth have a better education and a better grasp on this kind of advanced thinking than the typical human in the world where they find themselves. For this reason, the elves are very taken with the Outworlders.

Physically, I wanted my elves to be beautiful and scary. I used a variation on D&D elves, the size of small humans, light on their feet. I made them feral and predatory, catlike in many ways, and I worked hard to make them spooky and atmospheric and unpredictable. I gave them predator stripes in their hair, toffee skin, and fangs, because I bowhunt on foot and I know a forest predator when I see one.

If you’ve ever been behind a tree and watched a buck pushing does down a hillside, it can take them an hour to move 100 yards. They screw off, they lie down for no apparent reason, they eat some things, they stop and smell everything, the buck may stop and scratch his ass with his antlers for twelve minutes. Predators have to contend with this kind of time.

Stalking deer on foot, it can take an entire afternoon to get within bow range from the time you see them. You have to time your steps so that they don’t sound like human footsteps, so you take a step (SKRITCH), then wait 10-15 seconds until their ears go down again, then maybe two steps (SKRITCH-SKRITCH) then wait, then another step. . . and that last ten yards you’re sliding on your belly an inch at a time and hoping the wind doesn’t shift.

Elves have time. Time to explore, time to learn, time to build exquisitely detailed things. Time to play board games that last for years. 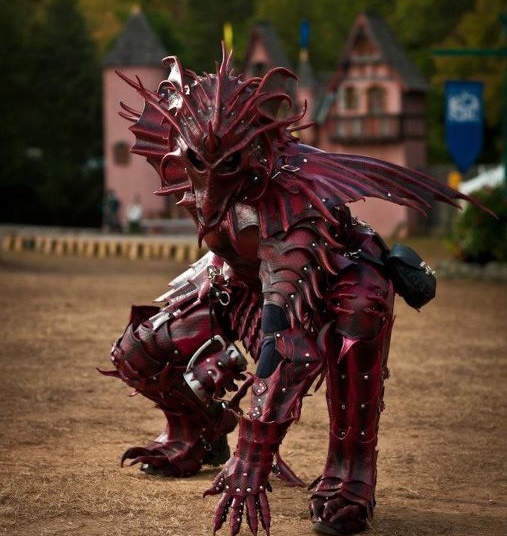 My Faerie knights wear armor this detailed, with every suit unique, and dyed to mimic flower colors and patterns. They have decades and even centuries to make warfare into a work of self-expression. And getting your ass kicked by a gladiola-colored gargoyle is something to tell your grandkids about.

So, reading the above, now we have our elves. Well, mine, anyway. Yours will be different. But with the behavioral and physical considerations concretized — which is part of your worldbuilding — we see where they fit in.

So let’s get meta. What do elves do for the book? Not for the plot, but for the book, or the series? Take it up a notch and dig into your world arc and your story as a whole. What are you trying to say?

Elves — or any immortal/long-lived species; Tolkien really did this with the Ents — are a reference point, especially if you’re creating a new world that the readers haven’t seen (as opposed to just hammering together tropes as fast as you can to push pulps out the door, as we covered at the beginning of this post, in which case you don’t need to read this; you have writing to do). The elves are there to explain things.

Immortal beings, or functionally-immortal beings, live in a different sense of time than we do, and they key in on overarching concepts that we can’t see. This is important because elves, if they’re functionally immortal, can see the entire series arc unfold in what amounts to the reader’s real time.

To an elf, an entire epic fantasy adventure that spans months or years amounts to a relative afternoon or two spent goofing off with the humans. This is unparalleled as a fantasy writing device, because when I start digging into the meta-ethical moral relativism of leaders with a disparate intellectual history from their subjects (which is roughly half of what the series is really about; more on that another time), and plotting the effects of various stages of war on a fantasy society (which is what the other half of the series is really about), I have the elves as a referential massif because they share common temporal space with the reader. Every now and again we will check in with the elves, who will touch back on the meta and serve as that buddy who watches a movie with you and explains the things you missed.

That’s why I use elves.

Well, that, and spectacular boobs.