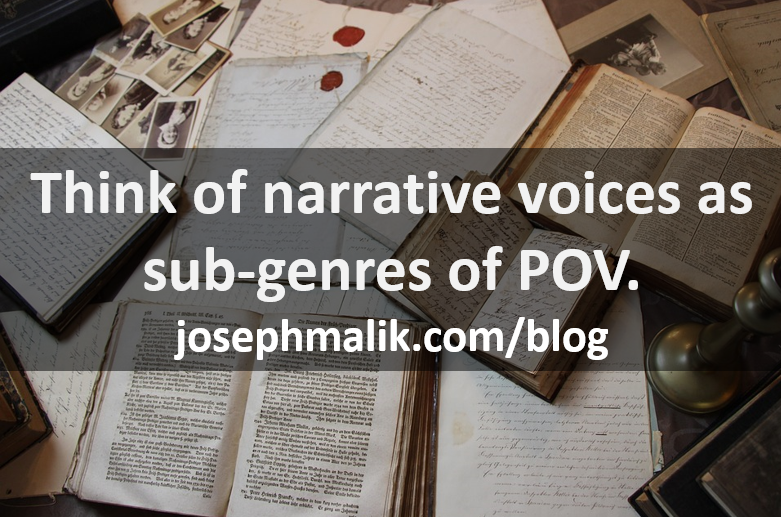 I want to touch back on POV and voice again, because the last installment on voice was something of a master class. I wanted to write a post that’s a bit more basic, for those of you who are just getting started on your writing journey.

This post is an introduction to narrative voice and POV. Narrative voice is the hardest thing in fiction writing. It takes a lifetime of study and practice to master. We’re going to knock out the absolute basics, here, with examples, if you give me about twenty minutes.

Disclaimer: this will only put your feet in the starting blocks. If you write your entire life, you will still be learning new aspects of voice when you die.

POV, or point of view, is popularly construed as a choice between three options for your story’s perspective: first person, second person, and third person. You can find a bazillion blog posts on point of view and even several that will tell you “which one is best.” And isn’t that, um, handy.

You wish. Pour yourself a cup of coffee and find something to cry on. Nothing worth a damn is easy, and narrative voice is critical.

If your understanding of POV stops at the above definition–if you aren’t aware of any POVs past first / second / third person–then your novel (and frankly, anything you write) is very likely going to be a mess. This is a cold, hard fact, and I’m sorry. It sucks to hear, and it sucks to tell you. But you will never, ever, know what’s wrong with your writing until you know what you’re not seeing.

There are several different narrative voices resident inside each POV. You must choose one. It’s okay, I’ll help. 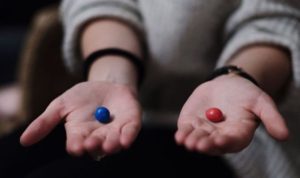 Fair warning: once you learn what I’m about to tell you, you can’t unsee it. You’re better for it, but it kinda blows. Take either one; these are left over from Easter.

Think of narrative voices as sub-genres of POV.

In first person, there are at least six distinct narrative voices. I am not making this up. There are likely more.

In third person, I can think of at least six voices off the top of my head.

So, those are your voices within POVs.

It’s important to understand the array of voices resident within each POV, because the voice you choose for your story–and you can only choose one; we’ll get to that in a minute–determines what information the reader is going to get. The unique information that each voice construes determines how the reader is going to understand the point of the story.

“Your story does have a point, right?”

A lot of the time, when you’re stuck for words and a story “isn’t working,” it’s a voice issue, and it can be solved by a rewrite in a different narrative voice. Seriously. It works almost every time. Story and voice are interlinked. (This is where, as an instructor for the military, I stomp my foot three times, which is our signal for “This will be on the test.”)

Say it with me: story and voice are interlinked. Your voice is your rear notch sight and your story is your front blade sight. The reader is the target. The point of your story is the round in the chamber.

If you don’t know the difference between the voices resident within POVs, and if you can’t recognize when you’re writing each, you can end up chasing your tail trying to write your novel, no matter how good your story is. You will waste a tremendous amount of your writing time attempting to tell the story you want to tell, and failing. We’re talking about years. I have to wonder how many would-be authors have novels sitting in desks or on hard drives that they abandoned because they simply chose the wrong voice–or perhaps they didn’t know that there were even voices to choose from beyond “first person” and “third person.”

If you don’t understand POV and voice beyond “first” and “third”–if this is all new to you–then it’s effectively a roll of the dice as to whether your story is going to line up with whatever POV/voice you end up naturally writing in, and therefore it’s sheer chance whether your story is eventually going to say what you want it to say. You might get lucky. It might serendipitously turn out okay. But it probably won’t. There are some big-name authors who instinctively have a feel for voice and didn’t have to study this. The hard truth is, you’re probably not that good. I know I’m not.

This matters because it is infuriatingly hard to read a story that wanders between narrative voices, and if you don’t know your narrative voices, you will wander all over the road without knowing it. Once you choose a voice, STAY WITH THE VOICE.

Shifting between, say, memoir and subjective narration in first person, or even adding stream of consciousness to an internal monologue, is jangling, even if the reader doesn’t know why. Changing voices inside a POV is akin to changing from first person to second person. Don’t do it unless you REALLY know what you’re doing, and you REALLY understand how the voice you’re shifting into will affect the information that the reader receives, and even then, only do it if there is NO other way to get that piece of information across.

And still, before you shift narrative voice, sit back, have a drink, go for a walk, and think about it, first. If you botch a voice shift, you will destroy your scene, and possibly your book. You’re juggling chainsaws, here. Even a reader who doesn’t know what voice is will understand that there’s something “off” about the writing: it will read as amateurish, or clumsy. They will likely never call it out as a voice problem, and they may not even realize that they didn’t like it per se, but they’ll look side-eyed at your novel after they read it, forever distrustful. They will. If you didn’t know about voices inside POV, and you have published a novel, readers have already done this to your book. I promise you. But that’s okay, because I’m going to show you how to fix it.

Stick with me; we’re in the home stretch.

To fix yourself, you as a writer have to not only know what the various narrative voices are, but you have to be able to recognize them when you read them.

The problem with this is that narrative voice is invisible when it’s done right, and that’s what makes it hard to learn and almost impossible to master without some kind of conscious and dedicated study. Most self-taught authors don’t understand voice, because they don’t see narrative voice. They don’t see it, because the authors who do voice well enough to be worth emulating make it invisible. You have to know what to look for. This is probably why you’re reading this right now and saying, “I didn’t know any of this.” You can’t. Voice is the rabbit under the table. You’re not supposed to see it.

I gave you some examples, above; start with them, and you’ll know what to look for. Reading makes you a better writer, but the more you know about writing, the better reading is going to make you. When you can recognize voice within POV, it’s like seeing the words on the page in different colors. The ability to identify narrative voice is analogous to having perfect pitch, except that it can be learned. Getting solid on narrative voice will improve your writing every bit as dramatically as developing perfect pitch would improve your singing.

There are plenty of resources for writing online, but precious little on narrative voice other than first / second / third–at least, half an hour of poking around didn’t come up with much. I don’t know why narrative voice is so overlooked, except that it seems the majority of this rush of new authors turning out ten thousand books a week are not professionally trained, educated writers. While that’s fine, somehow this critical piece of arcana has been lost, and it’s killing the craft. (When I talk about untrained writers, I’m not talking about writers who lack a formal education in writing; I don’t believe a formal education in writing is necessary. Self-education and self-study are still education and study.)