Steel: The Everything of All Things 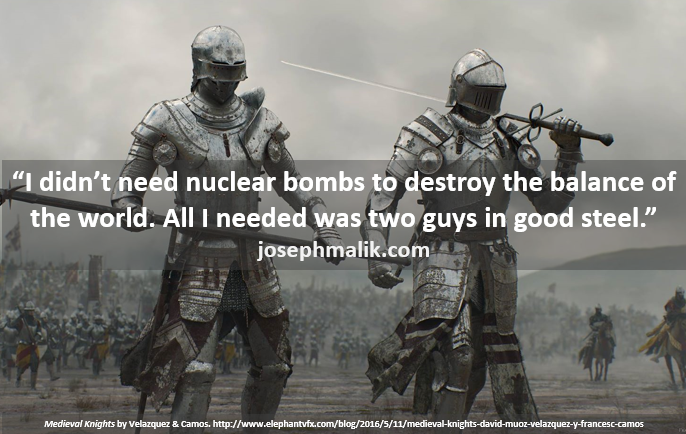 There was a wonderful demonstration at DragonCon this year where two guys took a mild steel helmet and used a hardened-steel helmet to literally turn it into a pancake.

Now, as cool as this is, these guys miss a huge point during the demonstration of comparative steel hardness in the first fifteen minutes: they assume that the armor in a pre-industrial setting would be made of the quality of steel that we have today. It wasn’t. It couldn’t be. More on that in a minute.

Also, iron armor, which they would have used back then (more on that in a minute, too), would have been a lot thicker than that little helmet. It appears that they’re using borderline costume armor, 2mm (14-gauge) mild steel, against 10- or 12-gauge  hardened chrome-moly steel.

But there’s a deeper point, here. And overall, that point holds.

While the disparity between iron armor–which, as I said, would have been thicker than that helmet by a longshot, because your armor has to actually, you know, protect you against stuff–and the steel of the time wasn’t as egregious as what they’re showing here, it was considerable.

Roll back to 6:52 and watch the guy hit the mild steel helmet with a hardened-steel shortsword. Look at the dent. That’s about what happens when you have a four-foot, three-pound greatsword (steel edges on an iron spine) impacting a heavy iron helmet. This is why greatswords were awesome and why ironing-board-sized anime “greatswords” are mouth-breathingly stupid and over-compensatory. You don’t need that much mass, particularly if your steel is good. In Dragon’s Trail, Carter Sorenson’s five-pound, five-foot greatsword made of industrial band-saw steel skullcaps a 400-lb. ogre in a cheap iron helmet. It peels the top of his head off and sends the crown of the helmet spinning like a UFO.

Then you have a worldbuilding problem. Because if you hit hardened steel armor with a hardened-steel weapon, it makes a loud noise, and that’s about it. That’s the real takeaway from the first twelve minutes of this video, here.

If you have a battlefield where everyone has good steel for armor, you now have a battlefield where nobody can really hurt anybody. Which is cool, except that nobody writes that. Many fantasy swordsmen have lightsabers, not swords. And the way that hardness works, things can’t cut things of similar hardness. If you have hardened steel weapons and hardened steel armor, you’ll need a pickaxe to get through the armor, not a sword.

Of course, you can use a magic sword. Sure.

What you’d have, though, if everyone had steel everythings, are guys out there basically doing Judo (or the Abrazare school of unarmed combat from Il Fior di Battaglia, which my sparring partner describes as “Judo for Psychopaths”), breaking arms and wrists and legs and then drowning each other in mud. Which is AWESOME – that’s pretty much the way we’re trained to fight in modern body armor in the military – but that’s not what anyone’s writing. (Yet. There’s a hell of a fight at the end of Book II that has two guys in modern steel armor. It’s also the medieval-era equivalent of a gundam match.) 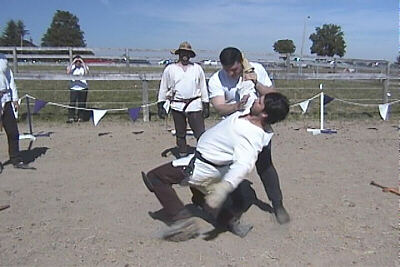 Secondarily, if everyone has steel armor, explain where they got it. Because there wasn’t the ability to affordably produce, much less mass-produce, helmet- or pauldron-sized (much less breastplate-sized) sheets of homogeneous steel of the caliber they use for the hardened-steel helmet in the video until the invention of the blast furnace. The Bessemer blast furnace came about in the mid-19th Century and was instrumental in kicking off the Industrial Revolution. And while I know you’re not doing a historical piece, if you have a method to make that kind of steel, even a magical method, then you have a whole ton of worldbuilding to do, because you’ve now got an industrial society: steel stairs, steel doors, steel reinforcing beams inside castles and towers, steel-headed battering rams to try and knock them down. Steel plows that never break and can bust through frozen or rocky soil; what’s that going to do to your economy? (Hint: the inventor of the steel plow was a guy named John Deere.) It just goes on.

A king had access to high-quality steel. A really, really rich patrician lord would, also. The typical medieval (or Planet England) knight, though, would wear iron armor, with the occasional piece of good steel if he was really a baller; maybe a gorget or a set of vambraces.

Hardened steel armor was one way kings held on to power.

We’ve covered this before, but to recap: steel is iron, mixed with carbon. Low carbon-steel is soft; high-carbon steel is hard. It can be hardened further by heat-treating and tempering. The harder steel gets, though, the more likely it is to shatter, so there’s a sweet spot somewhere in the middle, and its exact location is the subject of hundreds of years of debate. Too little carbon, and steel is no longer steel; it’s wrought-iron, which is bendy. Too much carbon, and steel becomes cast-iron, which is brittle. (It’s called “cast iron” because carbon lowers the melting point to the point where you can pour it into a mold. This is why the whole thing about pouring a sword into a mold is bullshit; the absolute last thing you want to go into a medieval-era battle with is a cast-iron sword.) That sweet spot, right in the middle, somewhere around 0.6-0.75% carbon, was really tough to get right in a pre-industrial environment. Look at how much work goes into making enough steel for one small tool. Click on this and check out the second part, too.

To make a breastplate out of that? Zoikes.

You could make hardened-steel sword and axe edges, though, and small tools like arrowheads and spearpoints. And you could crank them out pretty fast. These would puncture, and more to the point, ruin, iron and even expensive mild-steel armor. Not to the point of making armor useless, though. Because nothing ever really made armor useless. Obsolete, sure; useless, no. If armor was useless, no one would wear it. Armor sucks, and once you’re in a position where it does you no good, that shit’s getting left in your tent. With steel weapons, though, you could make enough small holes to force a guy in iron armor to call it a day and go home.

Mail was iron. Pulling steel into wire using a hammered sheet and a drawplate, and then drilling and riveting it to make mail, would have been insanely arduous. (Tell me: if hardened steel was the hardest thing going, what would you drill it with? How would you punch the solid rings out of a sheet? And then how do you mash the ends of the rivets together once you nip, flatten, and drill the ends of the wire? No, it’s cool; figure it out. I’ll wait.) Iron, though? Too easy. Steel tools make short work of iron wire. Mail was iron. Sorry. It was.

Against the steel of the day–against iron-cored weapons with welded steel edges–the knight in iron mail had a good thing going. Armor’s primary function wasn’t to stop incoming blows, but to redirect them by glancing them off a hard, curved surface, and then absorb the impact of whatever was left. Mail was fantastic at this second part. Best, though, it protected you from all the little nicks and dings and bruises and pain-in-the-ass incidental damage that adds up really fast and throws you off your game.

Your knight’s iron armor would still get wrecked–in fact, you’d want the ductility of iron, particularly for your mail; the deformation robs the blow of some of its power and it’s much easier to repair–but that’s how combat worked back then. You wrecked the other guy’s armor faster than he wrecked yours. You beat him up inside it, and you walked away the victor because you were meaner and tougher than he was; you were stronger, you had a greater tolerance for pain, you had a better ability to solve problems under duress, and you had a greater propensity to visit violence on another. You didn’t win by stabbing him through his fucking armor. Movies lie. And most fantasy writers don’t know what they’re talking about, because they base their combat sequences off of other writers who don’t know what they’re talking about (or worse, off of movies), and so on, all the way back to the beginning of fantasy history. Looking at you, George RR Martin. Sorry; your landscapes are beautiful and your food looks delicious, but your combat sequences are full of shit.

This is where my first editor started telling me that I needed to take all this stuff out and rewrite all my tech, because it would “just confuse everybody” if knights didn’t wear steel armor and swords didn’t cut through it anyway. Everyone would think I’m wrong.

He, however, is fired.

So, enter Dragon’s Trail, in which we put that iron-clad knight at the top of his game up against a guy with a modern, differentially-hardened L6 or 5160 sword, and rockin’ a shirt of case-hardened, welded mail. Holy crap. A guy in a hardened tool-steel helmet would knock a medieval knight cold with a stiff headbutt. Hell, you could stove in his helmet in with the toe of a modern work boot and probably kill him. Which is pretty much how, at the end of Dragon’s Trail, two guys from Earth manage to grind their way through a medieval battle that they had absolutely no business being in the middle of, HEMA skills or no. Jarrod Torrealday is good, but he’s not that good.

I didn’t have to give my guys machine guns and flamethrowers. They had every advantage going for them, already. In point of fact, the characters from Earth are effectively superweapons – between their tech and their knowledge – and the series is an allegory for an arms race. The whole point of Dragon’s Trail is to show how radically the presence of a superweapon can alter the geopolitical landscape. We’ll see more of this as the series progresses.

I didn’t need nuclear bombs to destroy the balance of the world. All I needed was two guys in good steel.