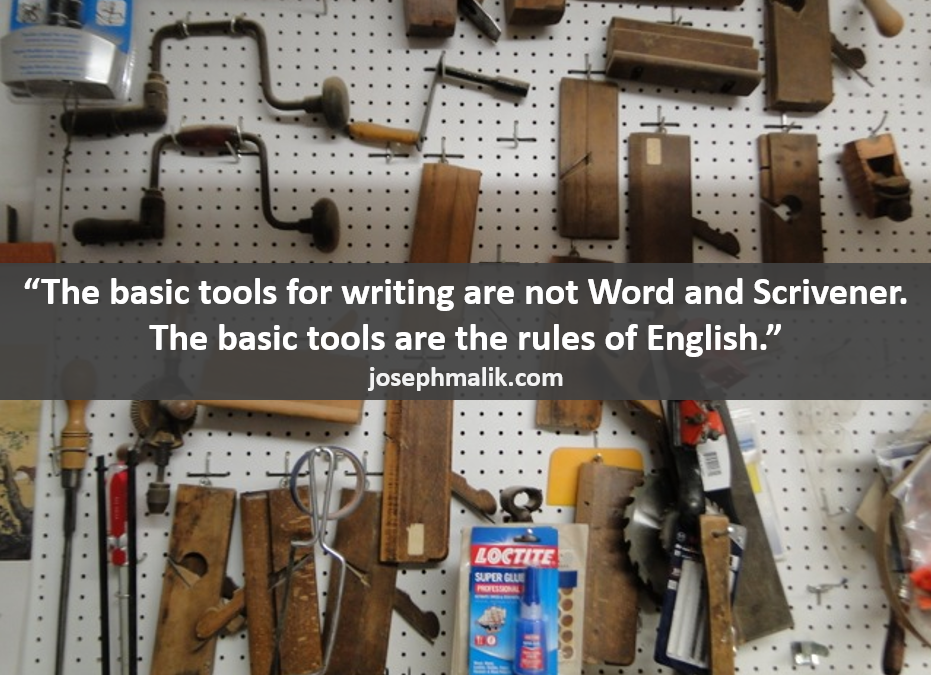 This started out as a forum post on Mythic Scribes, but a few days later the exact same issue came up on KBoards: “You guys always say ‘study the craft,’ but what does that mean, exactly?” I have had the following conversation with so many young writers that I decided I should probably just make it a blog post and link to it from here on out.

We refer to writing as a craft because it’s an art that’s done with tools. When explaining writing, I use the analogy of woodworking. I worked in a boatshop briefly, and while I’m moderately competent with a few tools, I do not have it within me to create beautiful wooden things with my hands. I don’t have the gift, and I haven’t had the study. It doesn’t help that I feel about routers and table saws the way other people feel about handguns and tarantulas.

However, I’ve seen woodworking done, and I’ve seen it done well. I regularly see young writers making mistakes that are the equivalent of a beginning woodworker trying to drive a screw with a knife, or using a screwdriver and hammer instead of a chisel, or using a file to shorten a board one stroke at a time instead of firing up the radial arm saw. So we’re going to talk tools, today.

The basic tools for writing are not Word and Scrivener. The basic tools for writing are the rules of English. You need to learn what these tools are for, and how to use them well. Have you ever seen a master carpenter grab a tool from his belt without looking, or set a nail and then drive it through a board with a single blow? You need to be that good with the rules of English.

So, here is your toolbox:

English basics: Strunk and White’s The Elements of Style, The St. Martin’s Handbook if you can find one — my personal go-to — and both a dictionary and a thesaurus in book form. These are your basic tools for how words go together. These should be within arm’s reach any time your hands touch a keyboard; think of them as your toolbelt. At every writing gig I’ve ever had, I have brought a spare Strunk and White, because I always end up giving it to someone so they’ll stop asking me how to use an em-dash or where the comma goes. Five bucks; money well-spent.

Writing basics: English and composition classes. If you’re not out of high school yet, see if you can get into AP, write for extra credit, or even audit a class at a community college on creative writing or literary theory. If you’re out of high school (or you didn’t study writing in college), there’s no easy way to say this: you’re going to have to pick up some college classes, or else buy textbooks in English and comp and teach yourself. Think of the lessons in these classes as your power tools and laser levels. They’ll get you writing faster and making sure everything you build is straight and solid.

Critique: Join a writer’s group where you share your work regularly. This is your “power tool safety” class, where you learn how to not get hurt. And also how to not hurt anyone else.

Advanced writing: Academic pursuits, either in college or as self-taught hobbies: philosophy, linguistics, comparative literature, classics, history, other languages, theology — anything where you learn to read critically and write effectively. These are your artist’s tools. Think of these lessons as antique woodworking tools handed down from a master craftsman who wants you to carry on the tradition. It’s not that big of a stretch, either; the professors and authors in these fields are often exactly that.

Professional work: Write professionally. I don’t mean write unedited books and send them out into the ether for a few reviews. Get a writing job, either freelance, or ideally on staff someplace. The best education you can get in writing is working daily with an editor who loves his or her red pen, and loves it so much that they want to show you all the things they can do with it. There’s no substitution for being critiqued, every day, for years.

Buy every book you can about writing. Do whatever the author says. Just try it. All of it. Keep what works. Throw out what doesn’t.

I’m not saying you have to go out and drop six figures on a master’s degree in order to write. You don’t. There are some fantastic self-taught writers in the world. I know some self-taught writers who are amazing storytellers, but they read five or ten books a week, and have, for years. I also know some tremendous young authors, but they work at it religiously and I’m sure they pay their editors top dollar. Which you should, too, but that’s another story.

But however you go about this, it takes time and there is no shortcut. If you really want to write, and you really want to dig in and create something amazing, you’ve got to learn all this stuff. And it’s going to take years. Depending on what you want to accomplish, it may take decades. I’ve been studying this stuff for thirty years and I’m still not the writer I someday hope to be. But I have a manuscript in front of me from thirty years ago, sitting on the corner of my desk, right now, and I flip through it once in a while to remind myself how far I’ve come as a writer.

Look: you can dive headfirst into this without an education in writing; you can bang out genre fiction to market, self-publish a series of first drafts, and make money, without doing any of the above. There is no reason not to put your beginning work on the market if you’re comfortable with doing so, particularly if people will buy your books. I’m not going to tell you that you can’t do that, or that you shouldn’t.

But doing so is the equivalent — talking woodworking again — of buying pre-made balsa wood birdhouses at the crafts shop and then painting them as ladybugs and selling them at the Sunday market. You can make a little money, and some people will like what you do, and you’ll make those people happy. And that’s all great. But doing this won’t make you a master woodworker. And if you do that, and that’s all you do, and you call yourself a master woodworker, the guy three stalls down selling hand-built rocking chairs and wooden puzzles is going to get a little huffy. Especially if he lost a fingertip or two learning his craft. And the person two stalls beyond him, who builds heirloom-quality custom birdhouses as a hobby, is going to have more people at her stall ooh’ing and aah’ing than you will.

The bad news is that there’s no Youtube video you can watch that will teach you all this stuff tonight, although Brandon Sanderson’s lecture series is a good start. (It will still take you a week to get through it all and years to apply it.) You can have a gift for storytelling — the truly great will couple all of the above with a gift for stories — but it takes year after year of writing and studying in order to write well.

The other bad news is that there’s no one book I can direct you to; no panacea. Even worse news is that anyone who tells you that they have just one book that taught them everything they needed to know is probably not someone you should take writing advice from. I probably have a couple of yards of writing books, if you include texts and reference books, scattered throughout my bookcases. Most writers I know live in houses largely decorated with books, and draw on most of them in one way or another. There are helpful books, for sure, but there is no secret tome.

The good news is, the time is going to pass anyway. If you’re just finding your feet now, and you want to write professionally, you might as well aim at being the best writer you can ten or twenty years from now. I know this is an unpopular opinion, especially these days when a lot of writers — especially, it seems, young writers — want to put books out there NOW and become famous writers, but it’s the truth. You can get published tomorrow but there are no shortcuts to becoming the writer you want to be. The only path involves tools and time. Start now.