They Have a Word for That? 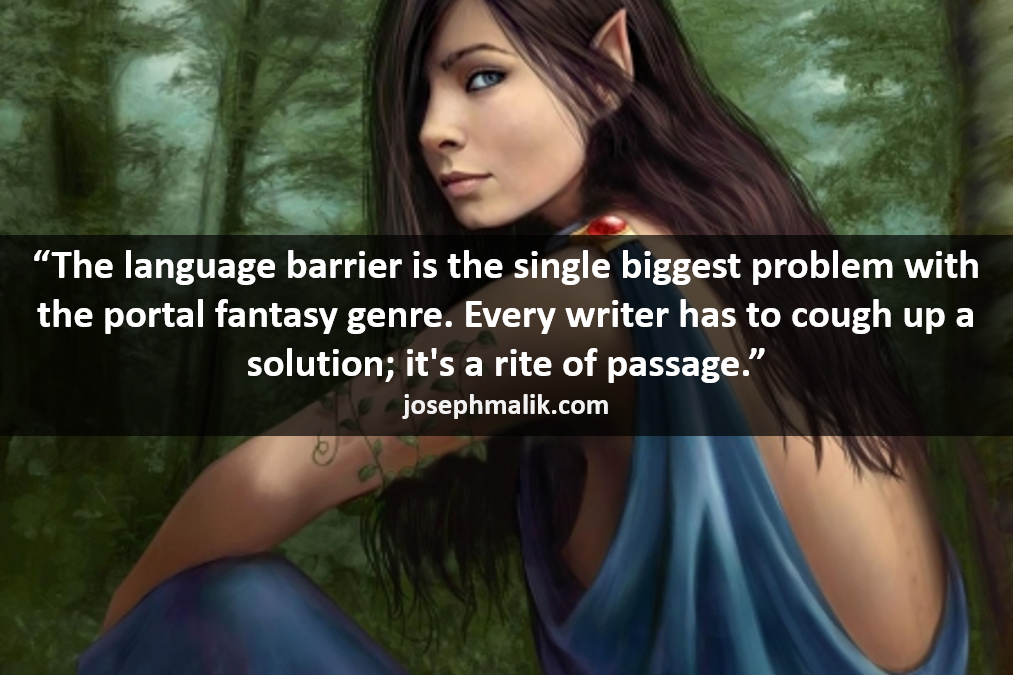 I want to talk languages in fantasy.

I should probably start this by saying that the language barrier is the single biggest problem with the portal fantasy genre. Every writer has to cough up a solution; it’s a rite of passage. Most solutions are simple hand-waves that don’t really dig into what languages are, or even address the fundamental reasons why we have different languages at all.

On the plus side, it gets written off as “because of the magic of the world they’re in, they automatically speak the language” so often that nobody will notice if you just do this and rock on.

I gave my characters translators, who walk around with them throughout the book. The translators are neophyte sorcerers who are telepathic. As the book progresses, the characters learn the language through this immersion, and also by having these tutors work with them in their sleep and / or trances. (It’s not a new idea; Heinlein did it in Glory Road.)

I would imagine that having a language instructor who’s telepathic would make it really easy to pick up a language. It’s also a great gig for those who have a slight magical gift, or those who are really gifted but don’t want to put the time and study in to move on to greater magic. Because those people will certainly exist, I figure. Lazy talent is a human universal constant.

I enjoy structural linguistics, so I had a lot of fun with languages. Your mileage may vary. I gave every country in the series its own language as well as several dialects and accents. Some areas of some countries speak multiple languages.

I did not create entire languages for everybody; I am not Tolkien. I did build a Faerie conlang, but I scrapped it. Other that that, I simply built the basic morphological, semiotic, and pragmatic structures to the point where I could differentiate them and build a rudimentary socio-linguistic profile of each — you know what? Never mind.

The characters quickly realize that, after beating their brains in for a couple of months, they still only speak one dialect of one language from one corner of one country, with its own idioms and accent. But, hey. Realism. And linguistics fun. Because, mistranslations. And as a linguist, instantly solving every language barrier, using magic or otherwise, makes me grind my teeth.

Languages define cultures. Languages enable — and limit — ideas. The differences in those ideas, sculpted by languages, drive worlds. Some of the ideas that my MC’s — who are from Earth — bring to the fantasy world don’t have reciprocal words in the language they learn. And vice versa.

My fantasy world has a word for the knowing look that you exchange with someone you’re attracted to but whom you would never do anything about because, for whatever reason, one or both of you are not on the market. It’s not simple lust; it’s a two-way thing that both know will never be. We don’t have a word for that in English; we substitute “lust” and pretend that this other thing doesn’t exist often enough to deserve its own word. In my series, it’s an idiom. It’s socially accepted that people feel this way and it’s no big deal.

Similarly, in English we have the words “orphan,” “widow,” and “widower,” but we have no word for a parent who’s lost a child. In our society this is something too horrible to be named.

Think about both of those things for a second. Consider how the lack of those words defines us as a society and what the presence and daily use of those words might mean for another people.

Where’s the fun in understanding everything about a society, instantly?

If you’re an author, you’re missing a huge opportunity by solving this with a simple hand wave.

Language is your only tool. Use it.