Showing vs. Telling and Typing vs. Writing: Why Movies are not Novels 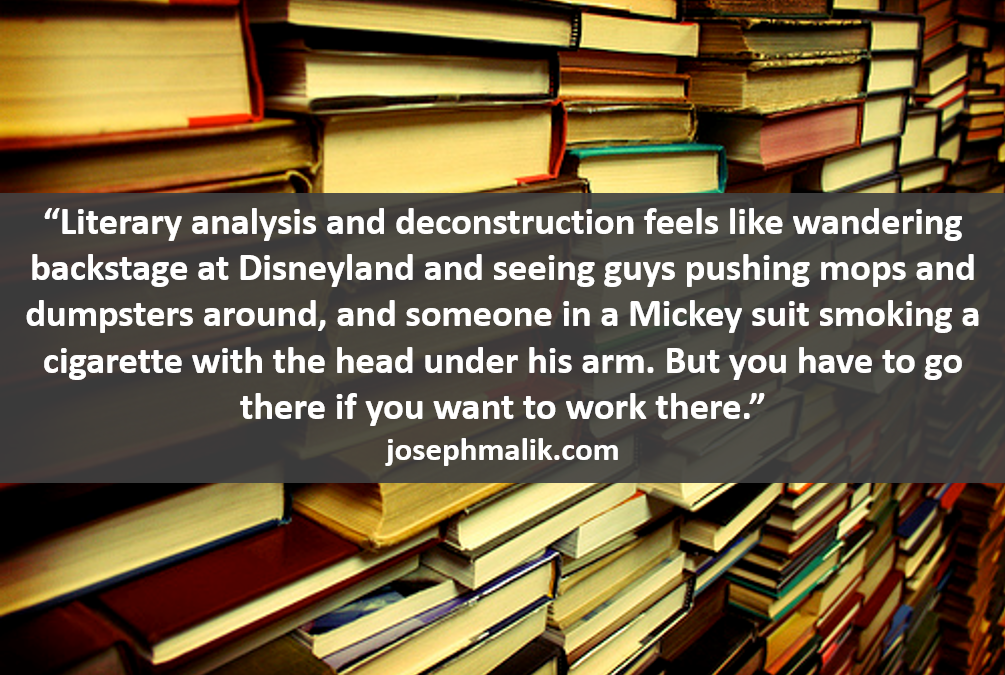 Let’s just get this out of the way right now.

I keep seeing this again and again in blog posts and on forums: writers touching back on movie scenes as examples of dialogue, pacing, and even character description. This makes me mildly insane. The argument for this is that movies always show, and “showing vs. telling” is always better.

And no, it’s not. Because you have to tell, in order to show. Writing is showing, through telling. It’s all in how you do it.

Writing means more than simply showing what is happening. Writing means creating words that result in visual (and ideally, phantom aural) representations of what you want your reader to envision. That’s the craft. Your words are brush strokes, not clip art.

“He looked creepy. He was tall, with scars on his face and a mean look.”

I pulled this off of a first page of a random book fairly deep — yet embarrassingly not deep enough — in the Thrillers section of Kindle. I changed a few words so as not to humiliate the author but the mechanics of this sentence are exactly as I found them.

This is an example of excellent typing. Concrete facts and a couple of vague opinions. “Bang, bang, bang, bang. Here’s what you see.” Technically, sure, you could do an entire book like this — a lot of people do — but writing like this is dishonest, because you’re not letting your reader do any of the work. You’re robbing them of the fun part of reading.

“He was the kind of guy you’d expect to see standing alone in the middle of a wrecked biker bar, calmly sipping a beer as the sirens grow louder.”

This is writing. Holy shit, is this writing. The narrator interjects his voice — because he’s telling the story — and the reader does the heavy lifting.

With a sentence like this (which is not mine and for the life of me I can’t remember where I read it, but it sticks with me to this day as one of the best examples of descriptive narration I’ve ever read) you don’t have to describe how tall he is, what he’s wearing, or what his face looks like, or even how “mean” he looks, which we usually interpret as how confident he is in his ability to do violence. Anyone reading this sentence can picture this guy. And they’ll all do it differently, which means that you just gave the character to your readers. He’s theirs, now. He’s a gift. “Here. Have a villain.” (Or, if I had written this line, a hero.)

Now, if there’s a key piece of plot or scene information in the guy’s description — that he’s as tall as the protagonist, that he has a wooden leg, that he’s in a tutu with the hero’s class ring around his neck — include it. Other than that, your work as an author — as far as describing that character, anyway — is done once you’ve enabled the reader to picture him for themselves.

People read books to see your story for themselves.

If you’re writing scenes telling your readers exactly what they should see — a common fault among authors who spend more time watching TV than reading — you’re stealing from people whom you’re hoping to make into lifelong friends. For this reason, don’t freaking use movies as literary examples, and for Chrissakes don’t try to replicate movie scenes in your writing. It’s intellectually dishonest; you’re skimming from the till. Read authors you like until you find a literary scene that accomplishes what you want to do, and then deconstruct it and see how they did it.

I know. Literary deconstruction blows. Literary analysis and deconstruction feels like wandering backstage at Disneyland and seeing guys pushing mops and dumpsters around, and someone in a Mickey suit smoking a cigarette with the head under his arm. But you have to go there if you want to work there.

And I’ll warn you right now, if you’ve never done this, or you don’t have a formal education in writing that allows you to do it and you have to learn comp and analysis from the ground up, first: learning the nuts and bolts of writing is like digging ditches. Which is why most indie authors, now that anyone can self-publish, apparently don’t bother. Don’t tell me they do, either; it glares at you from the writing when someone has no idea how to construct a scene for the reader. You can see it in the first first fifty words.