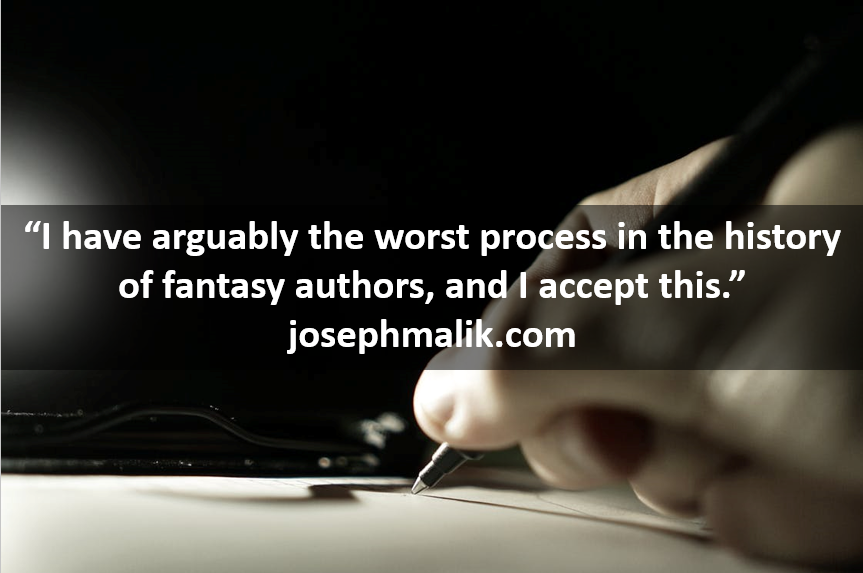 I’d like to revisit process in response to recent messages from readers asking where the hell Book II is.

It’s late, but I can explain.

First off, I’m mobilized in the Army Reserve. While I fell on my feet and didn’t get deployed–I’m in a rear detachment–I’m still pulling deployment-level hours and a deployment-level workload. There is a lot to do, and 90% of it is writing. Writing when you spend the whole day writing is really, really, hard. And the stuff I write at work takes some effort; I work in strategic-level analysis. Imagine writing nonstop graduate-level papers week in and week out. That’s this.

Secondly, I have arguably the worst process in the history of fantasy authors, and I accept this.

I don’t do fiddly little edits. I write each draft all the way through.

The first draft was short, about 50-60,000 words, because it was mostly bullshit: it had entire passages in present tense, some that were one or two lines in all caps (“THIS THING HAPPENS HERE” / “THIS GUY KILLS THIS GUY”).  A couple of scenes in the first draft of The New Magic were just jpegs I found on fantasy websites that I pasted into the document to remind me what happens or what something looks like.

When that was done, I set it aside for a couple of weeks, read it a few times, made notes in my series bible, and then I sat down to write the first “real” draft. This one was 80-90,000 words, a full-blown novel, and it started with a blank page.

When that was done, I started again, rewriting from a blank page and keeping what I liked. No copying; no pasting; I retype everything. Every now and again, I’d compare it to the previous version as an azimuth check for series arc, allegory, imagery, contingencies of rhetoric, all that writery shit. That’s about all the previous version is good for. If it’s gone completely off the rails, I can pull it back, although just as often, I’ll leadfoot it and see where it goes. I usually end up throwing out twenty pages or so whenever I do that, but every now and again it produces something cool.

When that draft was done, I reread it, I rightfully hated it, and I started again, comparing it to the previous draft as I went, and so forth. Draft after draft. Successive drafts required less comparison, and my barometer for “good” is when I don’t have any desire to look at previous drafts at all. That’s where I am, right now.

I think of it like a comedian practicing a routine in front of a mirror, getting the expressions and timing down, memorizing the flow and the stories. I can retype The New Magic starting tomorrow and probably hit 90% of the plot points and dialogue punches. That may or may not be a good thing, but it works for me.

I’m finishing the fourth and final rewrite (fifth draft, but I’m not counting the shitty first one) on another screen as I type this, and I’m probably 5000 words, maybe less, from finishing it. I have three scenes to write and then some fiddling with earlier points that I’m still not happy with. It’s due at my editor in a month.

She and I will spend another 4-6 weeks rewriting this draft, and then it goes to proofreaders, and then to my beta readers, and I may or may not make any further edits based off what they say; if I do, then anything I edit–if I so much as take out a goddamn comma–goes back to my editor and a proofreader. I learned that lesson last time.

So, this next phase once the book is “done” takes about 2-3 months of constant rewriting and reworking. I’ve been asked how many I rewrites I’m doing, and I don’t even know how to quantify that. The answer is infinite. All the rewrites, ever. 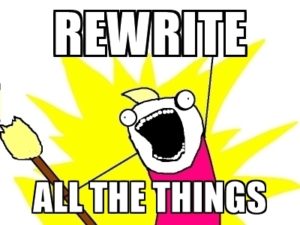 Overall, in the course of writing The New Magic since finishing the shitty first draft 8 months ago, I’ll have knocked out around 400,000 words, of which you will read the best 25%. But, those are really the only words you want–trust me–so it all works out.

I don’t recommend anybody do it this way, but by most accounts, it worked really well last time. So, stay tuned. We’re in the home stretch. Once this is actually done, then we’ll be doing the formatting and typesetting, and then I will be sending out ARCs. Contact me now if you want one. There’s a reply thingy at the bottom of the page; use it.

I will tell you right now, though: this is a different book than the last one. It’s the same characters and the same voice, the same world, all that. However, it’s the beginning of the Second Act, which is traditionally where the badguys get a leg up, and I’m nothing if not a traditionalist at heart. It’s darker, it touches on more mature themes, and it has less technical exposition because I’m treating Dragon’s Trail as a primer on a lot of this stuff; if you’ve read Dragon’s Trail, then I don’t have to explain how leather armor works or what a greatsword does or how you can plausibly build plumbing into a castle. The New Magic is less swashbucklery and more intricate, there’s a lovestory woven in there, and there are a lot more moving parts, because we’re starting to get into the theater-strategic ramifications of the characters’ actions from Book I.

All in all, you’re in for a hell of a ride. Line forms to the left. Buckle up.