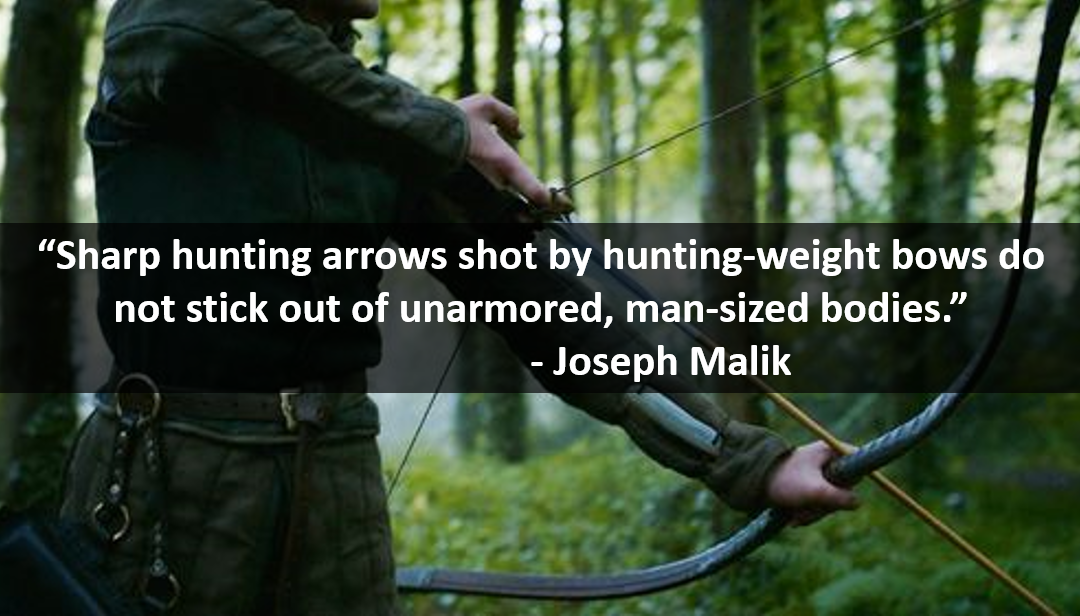 I shoot a 55-lb. handmade recurve. I bowhunt, traditional style, spot-and-stalk and stillhunting.

The single thing that I see in books and movies time and again that drives me absolutely nuts, and which I haven’t seen addressed anywhere — which is why everyone gets it wrong — is when somebody gets shot with an arrow and the arrow sticks out of his chest — or even worse, his stomach. 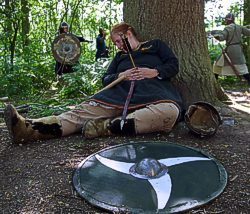 My father-in-law got a complete pass-through on a 300-lb. bear a few years ago with a 48-lb. handmade longbow and a traditional steel broadhead. Double-lunged him. Missed the shoulders, but that’s a big animal nonetheless. The arrow went through one side, out the other, and into a thicket on the other side of the bear.

A well-made bow that transfers its force efficiently to the arrow can drive that arrow clear through anything on this planet that is made of meat.

Sharp hunting arrows shot by hunting-weight bows (40+ lbs.) at effective ranges do not stick out of man-sized bodies. They do not. Ever. For that matter, the long, heavy armor-piercing arrowheads used against guys in mail would penetrate even better; they’re specifically built for maximum penetration.

Arrows do not hit and stick. I just want to make this clear. They make holes; two of them, to be precise: an entrance hole and an exit hole. Big, nasty, ugly holes. You can practically drop a golf ball into the exit wound from a steel broadhead.

This is an exit wound from a broadhead on a wooden shaft, fired from a recurve bow, that passed through a deer. 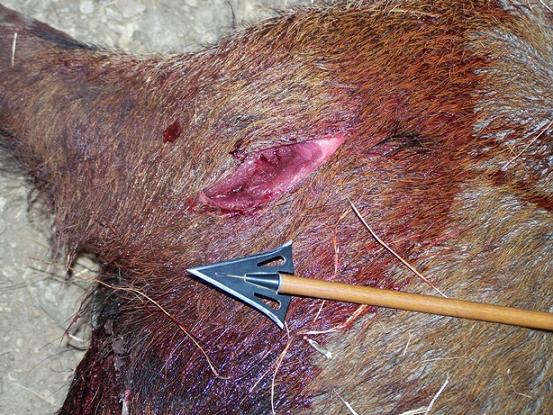 Vegans, you can just leave now.

What makes the bow such a frightening weapon, when you think about this (and can we PLEASE not turn this into an anti-hunting thing) is the reaction from the animals when you shoot them. If you’re a target shooter, or if you’re a gentle, decent soul who can only imagine killing something as a description in a book, you won’t know this. You can’t know this. But it’s important that you know this, because your characters will know this, and more importantly, it will keep you from being wrong when you write your archery scenes.

The animal has NO IDEA what happened. There’s no report, like there is with a gun. The arrow goes through — yes, THROUGH — so fast that you’re sometimes unsure of whether or not you hit it or where. (Another thing: you count on a pass-through because recovering the arrow is key to tracking and recovering the animal; the type and amount of blood on the arrow lets you know where you hit the animal and therefore what to watch for.) The animals jump when they’re hit, they scamper off, and they run for a bit and then pass out, usually under a tree where they think they’re safe. They look very peaceful when you find them. They have no idea what happened.

If you were shot with an arrow, you’d have no clue what happened to you, either. Intellectually, you could probably put it together. This is where we differ from prey animals. We are an apex predator. We figure things out.

It would probably feel like getting the wind knocked out of you — you take a sledgehammer to the chest or the gut or the back, out of nowhere, and then suddenly you’re bleeding everywhere and freaking out. (Tracking a double-lung-hit deer, it looks like someone was running full-speed through the woods with an open can of red paint.)

You wouldn’t hear the arrow, you wouldn’t hear the string, you wouldn’t even know what direction the arrow came from — if you knew it was an arrow at all. It’s not like you’re going to go looking for it right then. You’d only know that you’d been shot if you had prior knowledge of what arrow wounds look like. Which, to be fair, most warrior-types or anyone who hunted for food would.