I’ve been gone for a while. Sorry about that. But hey, duty calls.

I saw this today. And it made me want to write, which is always a good thing.

Apparently, this is happening. Because Russia:

Did I mention the shield-bashing? So much shield-bashing. Apparently, the way this sport is scored, a shield strike to the helmet counts as much as a sword strike. Think about that when you’re writing your fight scenes.

I noticed that there are no thrusting attacks. Probably for the sake of safety; those grille bars on the helmets won’t stop a sword blade. But otherwise, the mechanics of this are outstanding.

Also, by the middle of the second round, note that their swords are bent — 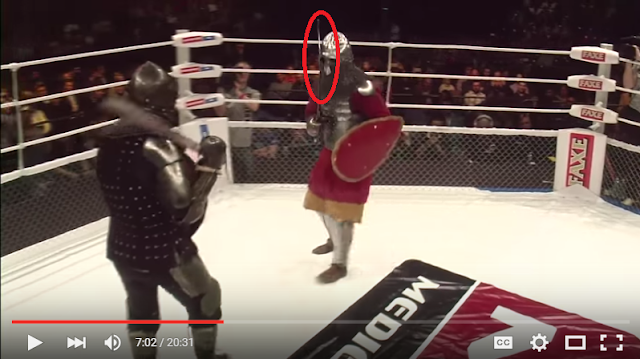 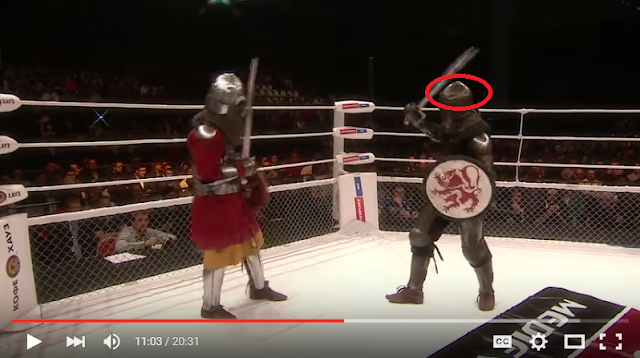 — that weren’t there a few minutes before — 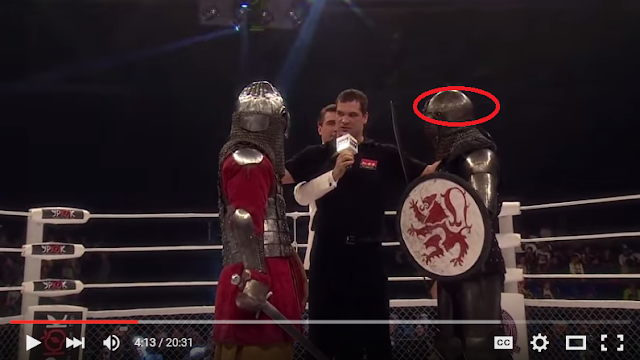 That’s modern steel, folks. Specifically, it’s steel armor — which your characters don’t have if you’re in an authentic medieval setting — and swords made from blunted steel that will skip off of steel armor. A sharp steel sword with a trick bevel laying that hard into iron armor might leave a dent the size of a grapefruit. And it will rob the recipient of — oh, I don’t know — probably any memory of fourth grade.

Toward the end of the second round (11:00 on the video; five minutes of actual fighting), they are exhausted. And these guys are lean, professional fighters with modern training regimens and access to state-of-the-art supplements. How’s your meat-fed, muscle-bound Conan clone going to do five minutes into the final battle? Just thinking, here.

14:50, the fighter in red is so overheated that his cornerman uses the shield for a fan.

The knee strikes at 15:51. Also yowch. That’s murder on your back, too, having someone bend you over and hold you down like that. When a boxer clinches, he’s working his opponent’s legs and back while he himself rests.

All in all, a good fight. And a promising sport. I just wonder if I can convince the bartender at Buffalo Wild Wings to put it up on one of the TV’s next time.