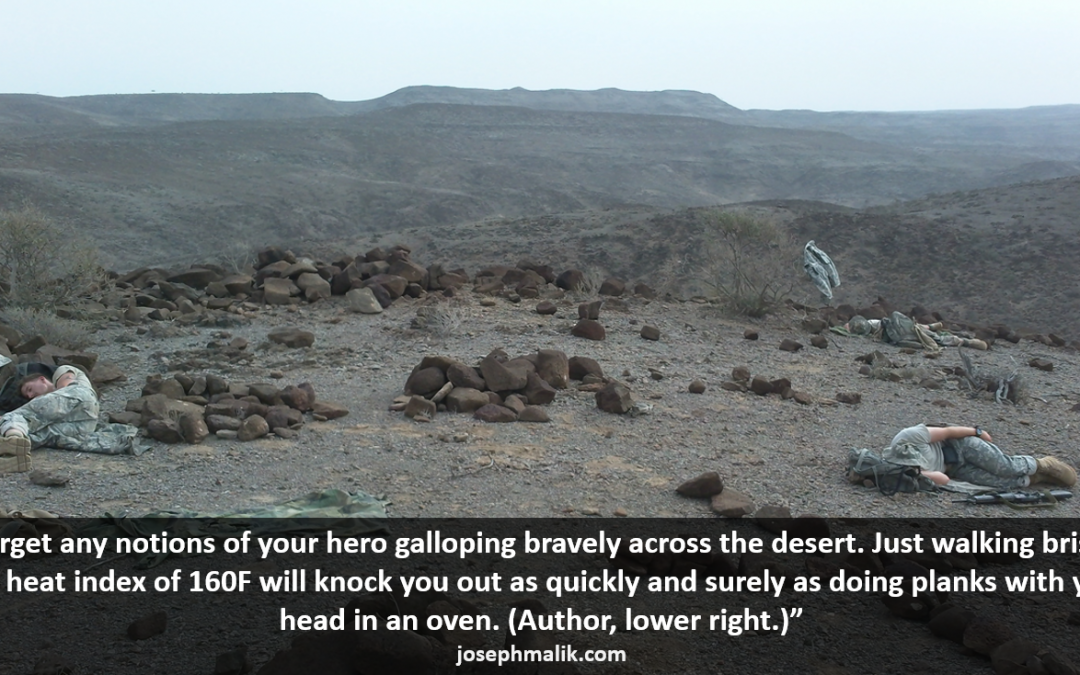 A writer buddy of mine asked for some advice on desert warfare.

Namely, “How could a newly united horde of camel-herders from the desert pose a threat to four empires?”

Wait, wait, I know this one.

This is a long one, so go get some coffee.

To whip four entire empires, they’d need help from a god. A big, preferably nasty one. Let me tell you why.

There is a reason that desert dwellers have never, in history, conquered much outside of their own deserts.

Primarily, the kind of warfare that the desert environment forces you into is idiosyncratic; the tactics that support a desert campaign don’t work very well once you get to an environment that’s not trying to actively kill you.

Desert warfare is a matter of resource conservation. First and foremost. A human being only has so much energy he can expend under brutal sunshine.

If you’re wondering how I know this, I volunteered for the French Foreign Legion Desert Commando Qualification Course in Africa a few years ago.

This has granted me a uniquely honed perspective on what you can and can’t accomplish under tactical conditions in the desert.

I can’t give you the exact numbers because they’re classified but let’s just generalize and say that half an hour of hand-to-hand combat in a heat index >150 degree Fahrenheit environment will kill a man who is on par physically with any professional athlete in the world, a man who is also wearing space-age heat management clothing and sipping from a Camelbak full of cold water and pharmaceutical-grade electrolytes. Kill him dead. (Ultramarathoners who cross the desert typically do so at about 3 miles per hour. They are not running; they’re speed-walking. When I talk hand-to-hand combat, I’m talking about exertion on par with running back to back six-minute miles for half an hour, or doing The Insanity Workout with no breaks.) Now imagine an underfed guy with a bota bag full of hot water in chainmail and quilting under the same circumstances. He won’t last fifteen minutes in a fight. He just won’t.

You can’t field a small army in the desert. You need a big one. But then, the logistics of keeping that many men alive in an area that’s trying to kill you 24/7 are mind-rattling. We can barely do it, today.

Hit and run attacks, enormous supply lines, guerrilla raids in the dark, and careful management and security of water and food stores are keys to desert warfare. Hollywood (and fantasy) lies; nobody can fight in the desert for long, sure as hell not in armor and not hand to hand. Engagements are quick and decisive. Desert warfare is about attrition; the desert destroys equipment, kills animals, and makes men insane. Usually, the winner in desert warfare is the side who makes the least amount of mistakes, and whose supplies hold out the longest. Luck is a huge factor.

Now, the good part about that is that if your desert people have a god who’s feeling frisky, he can make a lot of things go wrong on the side that he doesn’t particularly like. Your Chosen Ones’ enemies could run into a string of horrible luck and this could become the norm for anyone opposing them. This would make people not want to fight them at all. But when they get to a non-desert environment, nothing — nothing — that they did in the desert would work, militarily. They’d have to retrain, rearm, and face a brutal learning curve.

My writer friend mentioned the Mongols, but he needs to remember that the Mongols weren’t from the desert. They were from a high grassland. They were able to cross deserts, but if you look at the hard desert and uninhabitable areas that they crossed — thinking here of Afghanistan — they never really conquered it; they just made friends where they could and passed through as fast as possible, and started whooping butts again once they got to areas that would support them tactically.

Now, there are plenty of things you could do to make this work,  as a writer, if you’re married to it. First off, you’re a fantasy writer, so you have magic. That helps.

Secondly, you can give your Chosen Ones a god who likes them. That never hurts, either.

Give your leader a staff that doubles as a divining rod that always points to water.

Someone could have a map with a series of oases that no one else knows about — this would be worth more than gold.

Their god might give them knowledge of high-desert areas or “safe zones” that are cooler (and possibly with arable soil to some degree) where a large army can lay up and organize. Because this is how it was done.

The pics that follow show the northern area of Ethiopia, the Ghoubbet Fault, and Gran Barra Desert in Djibouti, three areas that butt right up against each other. This is how the Aksumites and Abyssinians managed to pull off ruling this area for centuries; invaders had to cross the desert to get to the good stuff, and for hundreds, maybe even thousands of years, no one in the “civilized” world knew that the lush green mountains of northern Ethiopia even existed. They were kept secret, and by the time you got an army across the desert they were too thrashed to climb the dry side of the mountains. More often than not, an invading army saw the mountains, said “Yeah, screw that,” and went home to report that there was nothing in Ethiopia worth stealing.

The area I’m talking about, the birthplace of the Great Rift Valley, is an oozing, salt-encrusted sore; a place so violently and unbearably awful it makes Mordor look like Glacier National Park. The French Foreign Legion, who have been fighting in this area for 150 years, call the Ghoubbet Fault “The Devil’s Asshole.” 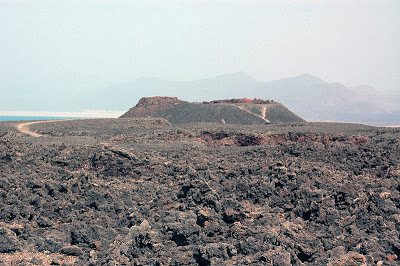 You’d come off your ships and then cross about 50 solid miles of this. It’s 120 degrees Fahrenheit during the day and north of 80% humidity because it’s below sea level and right next to the ocean. The water you see in the top left is a salt lake that is so alkaline it will kill you if you drink it. The humidity is what gets you; the humidity makes it feel like over 160 degrees during the day. This is known as a “heat index,” and it affects not only the way you feel but how your body behaves. Forget any notions of your hero galloping bravely across the desert. Just walking briskly in a heat index of 160F will knock you out as quickly and surely as doing planks with your head in an oven.

This is the hottest inhabited place on Earth, and I use the word “inhabited” lightly. There are about as many people living there as you see in this picture. You can maybe move a mile an hour through this kind of terrain during the day; three miles an hour at night but your animals can’t move over this at night — forget war engines altogether — and a good chunk of your troops will be combat-ineffective due to injuries from falling on the sharp rocks if you try it.

Ask me how I know. 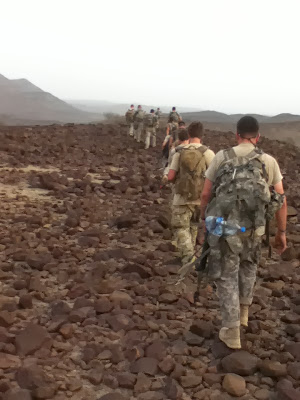 Once you’re through this, you’d get to a hundred miles of the Gran Barra Desert. You cross about fifty miles of this bullshit: 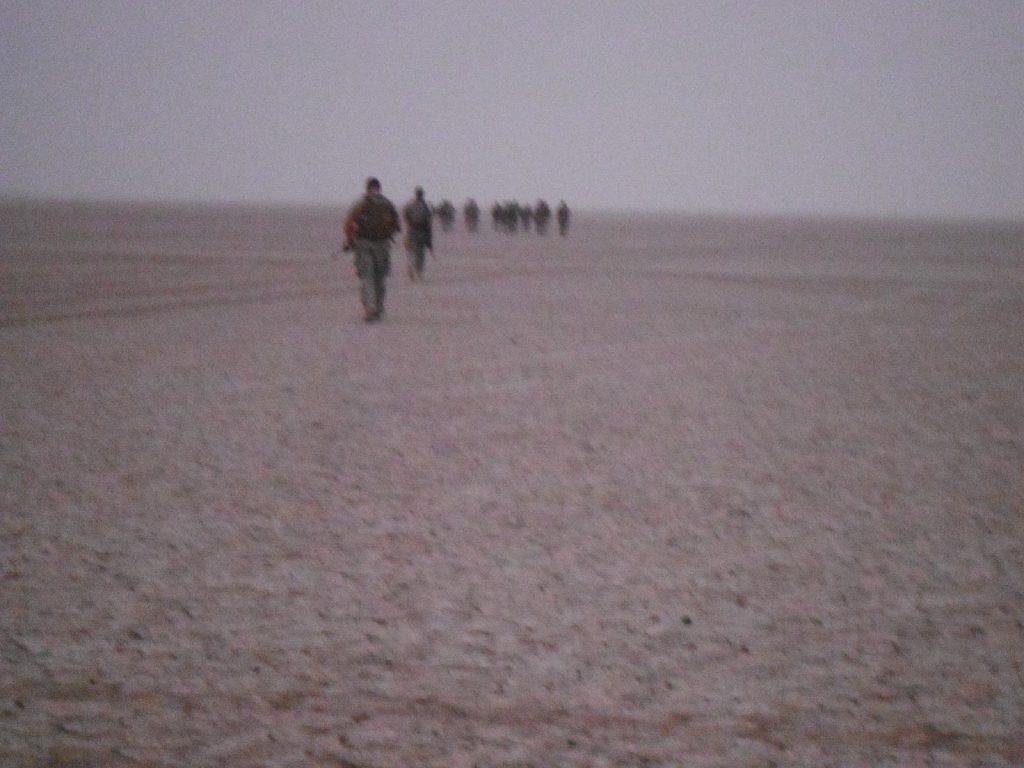 If you wanted to stop an invading army at this point, you’d simply attack their mooks. Break the supply chain, and the invaders are done. You know this, so you have a shitload of soldiers guarding your mooks. But then you need more mooks to bring them water to keep them combat-effective, and so on.
Until you get go the lush and thriving part, seen below, which ends at the Semien Mountains, which are still 50 miles away but you can’t tell that from here. They look much closer because of the moisture in the air, the heat, and the fact that they’re twice as high as the Rockies (like the Rockies, these are 12-14,000 footers, but these start at sea level whereas the Rockies start at 6,000 feet). So you’ve got some walking to do, still. Keep in mind, it’s not getting any cooler. You’re making 2 miles an hour. Maybe 20 miles per day. So, two or three more days to cross this. 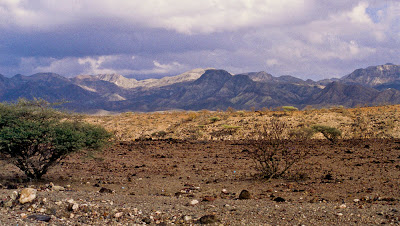 The trick now is to get up those mountains with whatever part of your invading force that you haven’t marched to death by this point. You’ve now been out here for a week, by the way, and you each only have whatever water you can carry, because you’re sure as hell not rolling wagons or moving pack animals across this terrain. So if you’re smart you’ll have brought several hundred or thousand expendable slaves or mooks who can schlep water back and forth until they pitch over and die.

You cross a desert with an army. A big army. And you expect to lose a lot of them. This is not something you undertake casually.

Those clouds on the horizon look promising, but this side of the mountains is bone-dry so getting up there is going to require even more mooks. And it isn’t cooling off.

If you can pull this off, somehow, and claw your way over ten thousand feet of elevation without water, you’ll be standing on the jewel of the Abyssinian Empire, “The Roof of Africa.” Forget Sally Struthers and Live Aid and everything you think you know about Ethiopia; Ethiopia has the largest non-oil-based economy in Africa and the second-largest population. 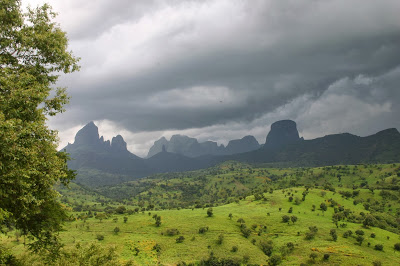 Same mountains. Other side. No, really.

This, this right here, is why. Most of Ethiopia looks like this. You just can’t see it from the ocean.

And once you step into this cool green paradise, your head dizzy with altitude sickness, a little short of breath — you’re well over a mile above the desert, after all — you feel the calming breezes on your cheeks, and hear the birds singing, and see the clear water burbling through the valleys, and you wonder why you’ve never heard of this place.

And right about then, the Abyssinian army comes screaming in from all sides. They are well-rested, well-fed, armed to the teeth, and fully acclimated to the altitude. And they completely and remorselessly whomp the living shit out of the haggard remains of your army and murder you to the last man. Because they sure as hell don’t want word getting out that this place exists.

That’s how you fight in the desert.

So if you’re not trying to actively defeat four empires, but just want to beat the crap out of them when they come knocking, this is how you do it. The desert becomes your weapon. No divine intervention needed. Not that it wouldn’t help.

Alternately, you could tweak something in the physical makeup of the desert dwellers themselves that allows them to operate unfettered in the environment, and treat the desert like a regular battlespace.

But where’s the fun in that?