Virtual FantasyCon2016: Holding Out for a Hero 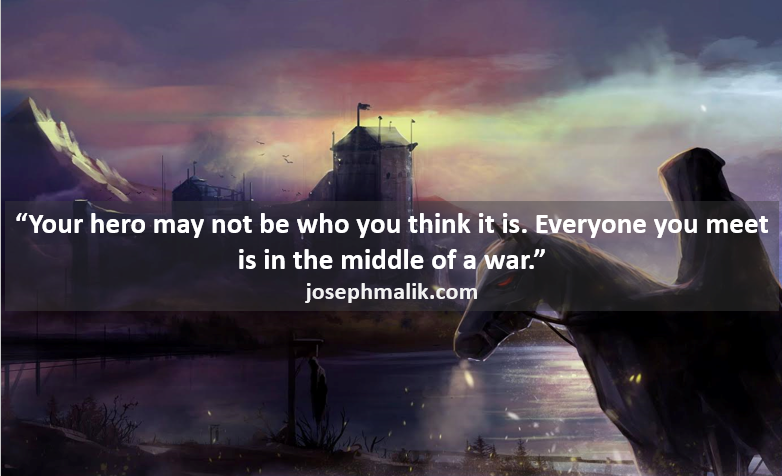 This article was written as a part of VirtualFantasyCon 2016.

So, personally, I took a bit of a different tack on the hero’s journey. Pour yourselves a cup of coffee; I’m going to show you how I got here, but it’s going to take a minute.

So, yeah. There have been some changes made. I want to talk about how I got here from there, because there’s a lot to be said about finding the real story within your story, and identifying the hero.

The first draft of Dragon’s Trail was the same story that everyone writes in high school, I think: a group of gamers find their way into another universe. This story is still being told; c.f. Stranger Things. Not that it’s not genius, but I was telling this story – a mix of The Neverending Story and Poltergeist – back in 1988.

Follow-on drafts became a book called Of Memory and Empire, a story of a young Vegas stage magician here on Earth who can do actual magic but can’t tell anyone about it. He gets summoned to another world, where he learns that he’s actually a lost prince. Together with a few friends he makes in this fantasy world, he develops his magic and combines it with modern knowledge to win back his father’s throne, fulfilling a prophecy. (I still have that manuscript, and will eventually release it as a prequel. Relax; it’s coming.)

As I began shopping Of Memory and Empire, I started plotting sequels.

Thought experiment: Think of any college kid you know who’s upset that things aren’t going his way and he has to actually work at stuff. Now make him a king, impervious to judgment and consequence. Now give him Gandalf powers.

Like most people thrust into positions of power, he has no idea how to handle it, and turns into a jerk. In my line of work, we call this a second- or third-order effect. Action – consequence – consequence. Dominoes falling.

Third-order effect: About ten years later, a neighboring country learns that the king next door is actually an alien, and the things he’s doing – the laws and rights he’s instituting – make no sense to them and pose a serious threat to their power. (The working title for Dragon’s Trail was originally The Year Everyone Got Nervous.) The neighboring kingdom launches a mission to Earth to find someone to kill the sorcerer-king.

For this, I needed a ringer. I had them hire a drunken, violent, down-on-his-luck stuntman from Earth; a wisecracking, womanizing, alcoholic, volatile loose cannon who was good with a sword and knew all the fantasy tropes from his work on movie sets. He was wonderful to write: outrageous, funny, spontaneously and hilariously violent. He kept surprising me as I wrote him, and I started to really resonate with him.

When he still didn’t seem dark enough, I added a backstory, and made him a fallen-from-grace Olympic saber hopeful who’d killed another fencer in a drunken duel. When I developed a fictional world of illegal underground dueling, the whole thing flipped, and I realized that the real story in all this was about the drunken swordsman’s personal struggle for redemption, not the young magician’s “coming of age in a magical world.” Because come on. That story has been told ten thousand times. Maybe twenty.

The morning’s breath in his throat, dry and ugly; a grip in his gut as a solid year of hell—still so fresh he could smell it if he lay still enough—stampeded across the darkness. A delusional ex-champion with a rapier. Endless months of crying coaches and shouting lawyers. A kaleidoscope of TV cameras and microphones, a magnificent life vanished like sand through his fingers, and a girl, achingly beautiful, who might as well be a ghost now. All of it an utter screw-up.

It’s the story within the story, and it’s where the real heroism in the tale resides.

By flipping the lens, the series went from being the coming-of-age, “Voyage of Discovery” YA “Tale of the Lost Prince™,” and became an adult-themed redemption saga about a man who lost his entire life and is crawling out of a bottle one Kardashian fencing lesson and back-alley duel at a time when he gets a chance to put it all on the line and possibly win his soul back. It’s a much better story. More to the point, it’s a story that nobody else is telling. In point of fact, I didn’t even have to tell the sorcerer-king’s story; it’s been told so many times that I can knock it out in a few paragraphs in Dragon’s Trail. You already know that story. You know it so well that I can tell another story altogether, and weave that one in.

The real story is not always the story you set out to tell. You need to take a good, hard look at your story and your characters and see if you’re telling the important part of the tale.