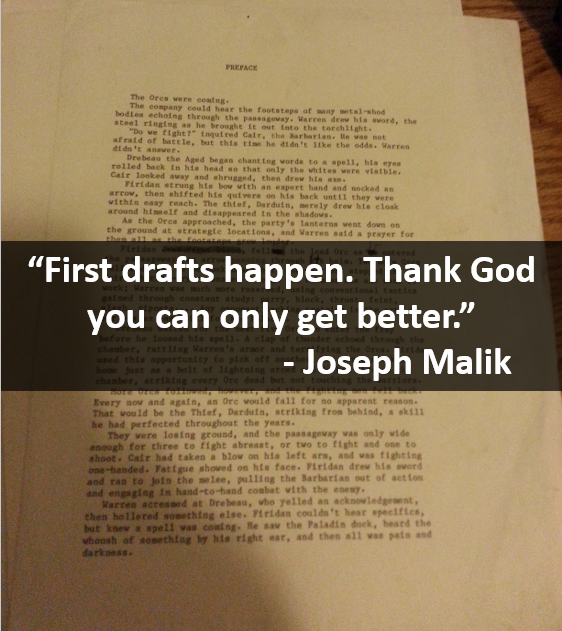 I started creating the world that became Dragon’s Trail nearly thirty years ago, as a senior English project in high school; the ubiquitous “what if?” that every teenager writes when he dreams that his Dungeons and Dragons group somehow gets transported into the game for real.

Edit 2016: I found the original typewritten manuscript in a box yesterday.

I rewrote and refined it all through my twenties as a hobby while playing in a band. Honing my craft, or so I figured. I submitted it for publication more times than I care to count; I still have the folder on a hard drive with an Excel spreadsheet listing publishing houses, submission dates, and quotes from rejection letters. The spreadsheet is pages long. Pages. I don’t know why anyone puts themselves through this, but let’s just say there’s a reason they call it “submission.” Assume the position.

Finally, in 1999, a major publishing house (I won’t mention names, but it rhymes with “Shmaen”) didn’t get back to me. For over six months, they didn’t get back to me. Their normal turnaround time on slush pile manuscripts, they swore, was no more than a month. I did the unthinkable at that point: I called them.

Pro tip: never call a publisher. Never. It’s exceedingly bad form, and it only leads to heartbreak and madness.

I was actually put through to one of the editors, who said she was glad I’d called. Dragon’s Trail, I was told, “was being passed around the office.” They’d be in touch, she said, but she’d really liked it and it was making the rounds.

I had made it out of the slush pile. I bought champagne that night.

A year went by before I heard anything. A Goddamned year. The Rule of Simultaneous Submissions meant that for the 18 months since I’d submitted, I couldn’t show Dragon’s Trail to anyone else.

And after that year, they passed. With a form letter.

I hung up my spurs.

I was in my late 20’s, and nearly done with Book II, but already burning out on the whole submission merry-go-round. It began to occur to me why “young” SF and Fantasy writers were in their 40’s. It wasn’t unheard-of to spend ten years shopping your manuscript. The standard industry line was — and by some accounts still is — that the only unsuccessful writers are those who stop submitting, but you know what? That’s a bullshit way to live. Tens of thousands of people with English degrees slogging through a receiving line of crap office jobs and telling people about their novel over a beer. I had better things to do.

About the time I got the last rejection letter, the dot com bubble burst, my band broke up, and I got serious about making some semblance of a life. Creative writing was no longer a thing I did. Over the next ten years I did some tech writing, joined the Army Reserve, picked up some consulting work, joined a bar band that ended up backing national artists, got married, built a house, and deployed in OEF — not in that order — and figured the whole time that hey, I’d done my part; I’d at least written a book. Dragon’s Trail was just one more thing to add to what was fast becoming the world’s oddest resume.

I found the manuscript and my Boxes O’ Worldbuilding while moving, in about 2005, played with it for a few years kind of as an affectation, got many more rejection letters, and put it away again around 2008. This time I totally forgot about it.

In 2012 I was critically injured during Operation Enduring Freedom-Horn of Africa and yes, that’s actually a thing. I spent a few months in a wheelchair in a hospital in Texas, at which time I found the manuscript — still in WordPerfect! — buried on an external hard drive. With quite literally nothing else to occupy my time, I reread it. Rereading led to facepalming, and facepalms led to rewrites. The bones were good; if I had to guess what had made the publisher balk way back when, it’s what I saw upon rereading after another four years: the story was there, the protagonist was interesting, the research and world-building were bulletproof, and it had a couple of nice twists — kind of a Fantasy Thriller — but all that good stuff was buried under an avalanche of Heroic Fantasy tropes that were fun for the sake of fun. With fresh eyes I could see the story clawing to get out.

I have stripped Dragon’s Trail down to the frame over the past year and rebuilt it. I have taken out entire characters, reworked story arcs, removed the ridiculous and the hackneyed — well, most of it — and made the minutiae of the whole fish-out-of-water aspect of the story a lot more fun; in the process rendering the whole Chosen-One-Fulfills-The-Prophecy shtick far less prevalent and removing a lot of the things I’d written sheerly for the sake of awesome. No joke, the loose ends were wrapped up and cosmic justice dispensed so elaborately that the last fifty pages of the original manuscript would have made Margaret Weis blanch. (Heroic Fantasy junkies, don’t sweat it; there are still plenty of moments of ball-swinging, helmet-shattering, Faerie-sexing awesomeness. The prophecy, however, went to the junk drawer along with the dragon, the dwarves, the death of the mentor before the student’s eyes, and the wizard fight at the end. Some of these things may come back by the end of Book III, but it was getting crowded.)

Some of you who are hammering your way through your own novels right now are asking me why I’d do a near-total rewrite when it was so close: close enough for consideration and closer than 99.99% of writers ever get, ever. Dragon’s Trail was probably “good enough” ten years ago. I probably could have gotten it published with another ten years of submissions. But it was not the story I want to tell now, not after flatlining in a Stone-Age shithole. My protagonist’s formative moment involves a near-death experience. Ninety percent of what I’d speculated about how he’d go on with his life after that turned out to be absolute bullshit.

The other thing that I decided to do upon the rewrite was concentrate less on the High Fantasy / Epic Fantasy aspects of the story and really drill down on what someone from Earth could bring to a fantasy world at war — the kind of world inhabited by creatures from our mythical past — and so I guess Dragon’s Trail went from the Guy-From-Earth-Saves-the-World-On-Another-Planet, High Fantasy:

. . . to Guy-From-Earth-Saves-His-Buddy’s-Ass-On-Another-Planet, Low / Gritty Fantasy. Not as sexy but a hell of a lot more . . . God, I hate the word realistic when I’m talking fantasy. What the hell kind of fun is a realistic fantasy?

Buy my book and find out. It’s a kick in the ass.

So this is my blog. I’m in the final stages of a rewrite as I type this, and I’ll probably go through a couple more. I’ll put up a few excerpts on this site while I get ready to submit and possibly self-publish. I’ll add the occasional blog post as things progress and also because there’s quite a bit I want to explain about the way I built my fantasy world. Maybe you’ll find some of it useful in your own writing.

I am currently mobilized in the Reserves, so I don’t know how much time I’ll have to devote to this. I expect things to pick up as I get closer to publication in a year or two.