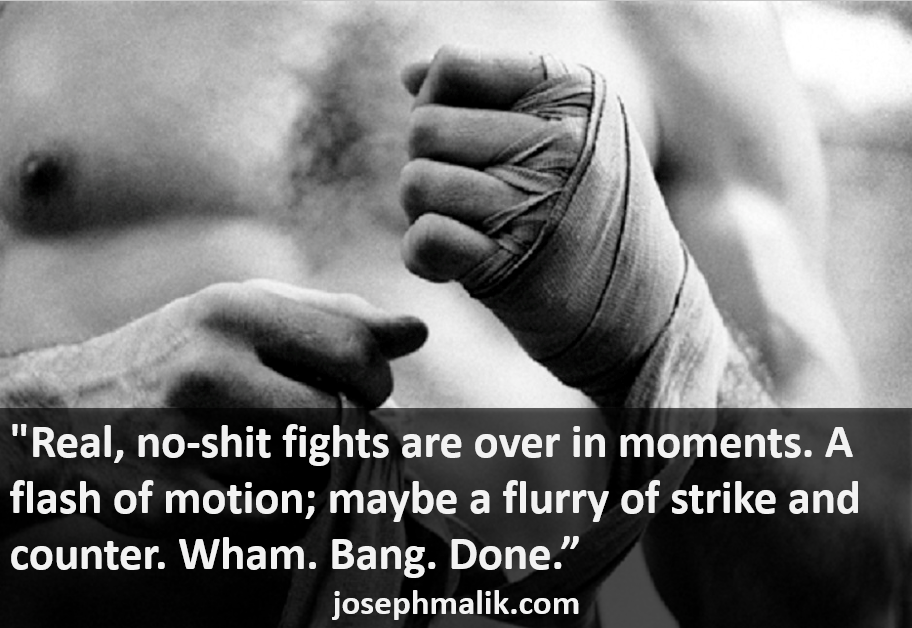 So I have a fight scene early-on which covers four pages, though the action itself is two sentences long. Thirty words.

Harold lunged.
Jarrod exploded forward in a whirl of flashing steel, and Harold crumpled and spilled into a knee-deep puddle, pleading his surrender as Jarrod stomped and beat him.

The buildup to the fight takes two pages; this is where the viewpoint character is noticing everything going on: taking notes, watching the pre-fight showing off. The world is breathing, and everyone has time to notice the details. Then come the challenges, then the crossing of blades, and then a quick blur and it’s over, with Harold on his knees and Jarrod . . . well, doing what he does.

There’s a two-sentence expository paragraph between the engagement of the combatants and the disarming to give a sense of how long the fight takes, and a new paragraph as Harold gets to his knees.

I firmly believe that it should take as long to read a fight scene as the fight itself takes to occur. This concept should repeat all the way down to the actions themselves: the descriptions of the actions should be relative to the time each action takes.

The bloodthirstier onlookers were disappointed. Though Harold’s nose was smashed and his eye swollen and his beard dripping blood, the duel had lasted only seconds.

Jarrod disarmed him with a kick, his face quivering.

Harold sloshed to his knees to find Jarrod’s rapier pricking him not-so-lightly in the eyebrow.

Instead of telling this fight scene move by move to show what an amazing swordsman Jarrod is — I get to that later, when Jarrod has a chance to “work out” against a skilled swordsman in a gym — I chose to stay in the viewpoint character’s headspace and watch the fight happen.

Because fantasy is far too full of blurry heroes and detailed fights. We need to reverse this trend.

Also, it’s not a fencing match. It’s an ass-kicking.

Combat isn’t blow by blow, even for the participants. Everything is reflexive. There’s bothersomely little planning, even. You go into a fight with a toolbox of moves that you know well enough that you’ll feel comfortable using them (Pro tip: if you don’t have a toolbox of moves that you’re confident in, run), so you see what your opponent is doing, pull something out of the trick bag that looks like it might work, and from there you take what you can get. There’s no give-and-take, no right-of-way, no exchanges, and sure as hell no thinking, “I’m going to attack down the four line, envelop, take a step to the right, disengage with a cutover, and then slash diagonally.” You don’t think it, and you don’t even experience it that way. You’re doing a Rubik’s Cube while pitbulls are tearing at your legs. You don’t notice things. This is key, because usually, the person who notices the least number of things, loses.

I have had entire boxing matches–I’m talking three, 3-minute rounds, and 3 minutes is an eternity when someone’s trying as hard as he can to beat you unconscious–in which I found myself in the locker room afterwards remembering only a few key moments: the garlic on my opponent’s breath when we clinched, something my coach said between rounds, seeing my wife in the crowd. Most of my ring time is lost to my conscious mind, and resides only in muscle memory.

Conversely, some moments from the ring are burned in my mind forever: lying on the canvas and hearing the crowd roaring in approval, and the time I shovelhooked my opponent in the liver and he puked all over my feet. Asshole.

And that’s only sport fighting. Real, no-shit fights are over in moments. A flash of motion; maybe a flurry of strike and counter. Wham. Bang. Done.

This is great news to most writers, because most writers haven’t been in a fight since grade school, if ever. And the less you talk about something, the less you have to know about it. Way too many fantasy authors write long and hideously detailed fight scenes thinking that they’re waxing expert on the subject because they’ve watched swordfighting on YouTube, and those of us who fight for fun (and/or for a living) usually call bullshit about four lines in. Make it fast, make it blurry, show the aftermath. Keep your cards close to the chest. Everybody wins.

I had a guy take a swing at me in a bar some years back–well, more to the point, he tried to. He started reaching back over his shoulder, loading his punch, when I popped him with a quick jab, right on the chin; just a flick, no power behind it. I barely tapped him, just enough to make him flinch. He was on his back foot with his weight still going backwards and his reflexes did the rest: he took out a table and two chairs as he went over. It happened so quickly that people who were standing right next to me literally asked each other what just happened. They thought he was drunk and fell over on his own.

That last paragraph, by the way, is terrible fight-writing. The whole thing took half a second, with another few seconds of falling down and knocking stuff over and people being alarmed. I’d never write a fight like that the way I did above. Sticking to my rule above, about description lengths being relative to action lengths, I’d do the fight itself in two lines, with two sentences for the aftermath.

I saw his punch before he did.

“I dunno,” I said, “I guess he fell.” My knuckles ached; the guy had a head like Fred Flintstone and my range had been a little off.

If you ever hear anyone talking to the police after a fight, they’ll all say the same thing: “It all happened so fast.” Every time.

Plus, the actual character description and definitive moments happen everywhere except in the fight. The good stuff happens when the fur isn’t flying.