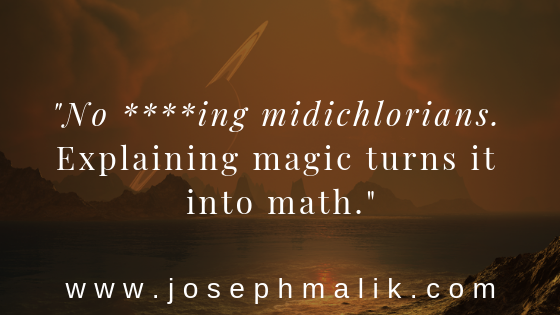 This is an extension of a post I made over at Mythic Scribes in which authors were asked to explain their magic systems in five bullet points. This was fun, in no small part because with the increased role of magic in, well, The New Magic, some readers have been asking exactly how magic works in Gateskeep and the surrounding neighborhood.

My magic system is pretty simple.

A little background: I was raised in a Native American household, steeped in tradition, which included a strong belief in magic. There were never any “rules” to magic the way that we were taught about it; there were just things you did and didn’t do. My stepfather, who raised me from the time I could walk, was descended from a Blackfeet medicine man, so we took this all pretty seriously.

I wanted the world in my series to feel the same as the world I grew up in: highly superstitious, with 100% unwavering belief that magic is real and everywhere, but with none of it fully understood and therefore all of it scary as hell. Also, no “leveling up,” no hard and fast rules, no fucking midichlorians. Explaining magic turns it into math.

So, five bullets about magic in my series:

This last point is the key to the way the world works, because the ability to rip and fold space-time means their little corner of the world is a nexus between other planets. Beings from other worlds are referred to as “demons,” including Jarrod, Carter, and Ulo. Overall, though, very few are human; some demons are like the thing that Heggy and Galé tangled with. In Dragon’s Trail, the sorcerer Crius explains to Jarrod and Carter that humanity on Earth originated in their world, via a mass exodus to Earth after a war.

The fabric of the universe is wonky in that corner of the world because of the effects of a substance central to my next series, which is as close as I’m going to get to crossing science with my magic.

The Outworlders is, among other things, a theoretical sandbox examining the role of superweapons in conflict escalation–international conflict analysis is what I do, professionally–so I needed to use the characters from Earth and their advantages (technological, educational, martial, and so forth) to imbalance things in order to set the ball rolling.

However, to pull this off, I had to build in a series of factors to induce intractability. Primarily, that meant ensuring that the magic in the world didn’t already have the ability to destabilize anything on its own. Magic couldn’t function as any sort of weapon that would give one side an advantage over the other.

To this end, I developed strict limitations on the uses of magic; some of them innate to magic itself, some of them hammered out through the rigors of instruction, and some of them handed down by edict and enforced at swordpoint if necessary. The inviolable rule is that in my world, you don’t use magic to harm people. It’s not taught, it’s not tolerated, it’s not done.

The New Magic is the beginning of the world hitting back at the characters by, among other things, bringing up a forbidden type of magic–war magic–to counter the technological and educational advantages that the characters bring with them. This is where we see the fundamental vs. ethical limitations on magic coming to odds, and also the idea of technology as a form of magic in and of itself. This last bit is not a new concept in fantasy and sci-fi, but equivocating magic and technology as constructivist stressors is really fun.

So, as the war ramps up and starts to spin out of control, with the world struggling to adapt to the presence of the people from Earth, I need them to start to wonder if limiting magic was such a good idea after all.

A reviewer recently made an astute observation about the apparent uses of magic in the books by pointing out that I’m writing the series from the perspective of an unreliable narrator.

So, we’re delving back into voice for a bit, because the narrative voice is, in part, a limiting factor of the magic system.

The narrator who’s telling you the story in both books is omniscient in voice only. It’s told from his point of view, but he doesn’t know everything. In fact, there’s quite a bit about the world that’s still fuzzy to him.

This is a slant on the naïf, one of the five common tropes of the unreliable narrator, the others being the exaggerator, the clown, the madman, and the liar. I originally got the idea from reading Rothfuss’s Kingkiller Chronicles, whose main character, Kvothe, appears to be a combination of the exaggerator and the liar as he narrates sections of his life to a scribe.

I flipped it around and wrote The Outworlders from what is effectively the scribe’s point of view. It’s told in retrospect, the way he’d tell it over beers years later, instead of relating the story as he’s writing.

As the author, I have to understand how every last detail works in the world of the series–I have enough worldbuilding socked away in a trunk to support at least three more series in this setting–but it would break suspension of disbelief if the books were narrated by someone who understood every corner of the world, particularly the magic. This brings us back to voice.

I needed to write this series from a narrator’s perspective, because (refer to my previous posts on voice) we choose POV to determine what information we give our readers. To make the series work and create the necessary tension–especially in Book II, when things go sideways–I needed to filter the information that you receive.

I also wanted to write this all in a modern voice, which meant using a narrator from modern-day Earth. And I couldn’t do it in first-person, because that would actually cause you to understand the world even less. To tell this story they way I needed it told, the narrator had to have spoken to several people involved in the story.

However, the narrator only knows what he’s been told. The parts of the story from Jarrod’s and Carter’s perspectives, particularly the parts involving magic, aren’t explained very well, because, as we discussed above, they don’t understand them. It’s not their lane.

I appreciate that this isn’t a typical approach in fantasy, where magic is often both perfect and perfectly explained, sometimes clear down to exact percentages of dragon blood, or fractions of godhood, or even descriptions of leveling up and flashing hit points in the sky in some LitRPG novels.

The questions that you have at the end of The New Magic, which are the same questions that Jarrod has, are my version of a cliffhanger. You’re confused because he’s confused. It’s the second act, so this is exactly how it’s supposed to be: How can Vader be Luke’s father? Where did Han go? Why is Lando wearing Han’s clothes?

I’m just going to reiterate this: my narrator is not me. He’s just another character.

His knowledge is imperfect, and it has to be, in order for me to write the story that he needs to tell and to create the tension that’s left at the end of The New Magic. It’s the narrator’s story, not mine, and not even Jarrod’s. You’ll meet the narrator in Book III, and trust me, a lot of the questions lingering at the end of The New Magic will be resolved in another 500 pages or so when we wrap this up.

A few questions will remain, however, and a few new ones are going to come up before we’re done. A whole new series is coming that will answer them.

So. Enjoy. Go back and thumb through Dragon’s Trail and The New Magic and take a closer look at how I did this, and see if there’s an application in your own writing for unreliability. Feel free to hit me up with questions below.

The magic, however, is about as developed as it’s going to get.

Most of all, have fun.