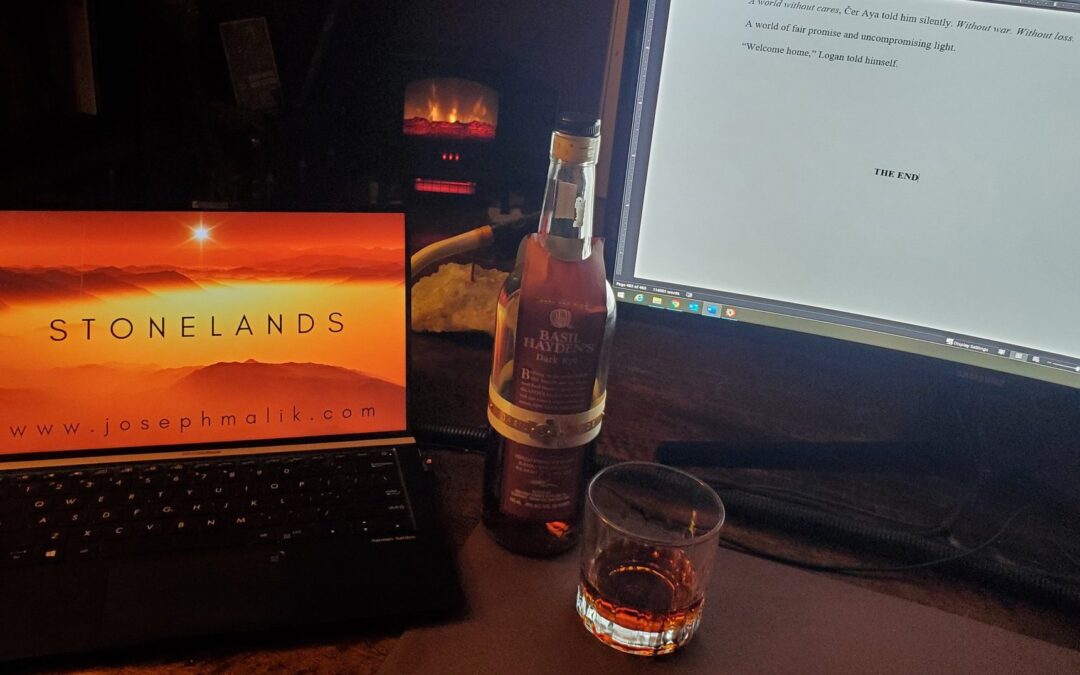 As some of you might have seen in my other social media by now, the first book of the next series, tentatively entitled Stonelands, is through its final draft.

I started writing Stonelands back in October of 2019, though I’ve been concepting it since 2017.

Stonelands is the first book of the next series. It’s portal SF about modern-day Special Operators exploring the world of the first series. There are two recurrent minor characters and several Easter eggs for fans of The Outworlders, but otherwise, it’s new characters in a new corner of the world and might as well be a new series altogether. As the series goes on, a diaspora of contemporary SOF operators take on roles throughout the fantasy world.

If you’re torqued that I’ve been working on this instead of Coin of the Realm, there are a couple of things you need to understand, so sit your ass down and pour a drink because I’m not saying it twice.

First off, Stonelands wouldn’t let me not write it.

It started off as a wild hair brought about by some of my early ride-or-die fans, a few of whom had apparently glommed onto a conspiracy theory that I was involved in a Black Ops program that explores other universes, and this explained how I know how to swordfight, speak Elvish, use celestial navigation on alien planets, beat the crap out of a knight in armor without mussing up my suit jacket, and so on; all the stuff I was demonstrating at cons as I built my early readership.

Wouldn’t it be fun, I thought back then, to make the next series about a SOF unit exploring Falconsrealm, or points east? Say, the Eastern Freehold, an area I had already developed but hadn’t used, yet?

This turned into a short thought exercise in international conflict theory, and as I sketched it out, it turned into a story about identity, as well as a deeper study of intersectionality issues in modern-day SOF, something I see every day and have never seen addressed in military fiction, especially the glut of modern military thrillers with their obsequious, relax-and-breathe-through-your-nose hero worship of SOF. We’re just people. We’re a hell of a lot more like the crew of The Orville than the guys in The Unit.

Secondly (taking a deep drag off a cigarette and flicking it across the patio), I’m clean, now.

When I was trying to knock out Coin of the Realm, the Army had me on such a massive cocktail of drugs I’m surprised I was able to write at all. I have to wonder if sometimes my hands weren’t three inches above the keyboard like Thelonious Monk.

The short of it is, I have neuromuscular sequelae secondary to combat-related injuries that nearly killed me in 2012. I wrote Dragon’s Trail in the hospital while learning to walk again.

The nature of my work in the Army is such that I’m on and off Active Duty a couple of times a year; my Reserve unit is a component of Special Operations and has a freakishly high operational tempo. I will guarantee you that over the last ten years I have put in twice as much time on-mission as most 20-year veterans, who typically deploy once every 3-5 years.

Unfortunately, every tour, I get assigned a new Primary Care Physician, and they don’t compare notes. A few years back, one of these last-in-class Captains-for-Life prescribed a psychopharmaceutical with neuromuscular side effects to manage one of my conditions, a recurring muscular tic. And then the next doc, a few months later, thought that was a great idea, and added another for another condition. The next doc added another. And so on. Basically managing my conditions with blast damage.

After a couple of years of this, an old friend I hadn’t seen in years talked to me for like ten minutes and realized I was doing strategic analysis and executive-level briefings while tripping balls. He went to my supervisor. There were discussions. I wound up in a command-driven psych evaluation.

I kicked all this shit cold-turkey in August of 2019, under close medical evaluation; I spent the week before WorldCon detoxing at my family’s ancestral home in Galway, making me possibly the first person in history to go to Ireland to sober up.

In mid-October of 2019, probably the very day the last of the shit cleared my system, I started writing Stonelands and couldn’t stop. So, this is where we are.

Stonelands is a much more mature book than anything I’ve done before. It harkens back to Dragon’s Trail’s writing style, leaning stylistically on thriller greats like Stephen Hunter, Eric van Lustbader, and Trevanian. There’s quite a bit of James Clavell in the stand-off distance from the worldbuilding, as well. If you’re familiar with Shogun, you’ll see the same sort of bewilderment and awe in the protagonists. The violence is much more graphic; there’s less of the Deadpool-style cartoon violence and way more splattering of organs, machine-gunning, and terrifying death at the hands of alien horrors. The sex is also more graphic, with fewer fade-to-black scenes. You’re welcome.

Conversely, The New Magic dug into a lot of literary stylists: Pynchon, Gibson, Rankin, Eco; it’s what I was reading at the time and I really wanted to swing for the fences. I enjoy writing that way, and I’m going to finish The Outworlders in the same style, but Stonelands and the series to follow is a return to accessible, old-school thriller pacing and voicing.

THE WHEN AND WHY

I talked about this in a previous post, but it bears repeating:

Because Stonelands deals with modern-day SOF tactics, techniques, and procedures, as well as military capabilities, intelligence tradecraft, and DoD policies–and given my current job and (ahem) work history–it will have to go through security review at the Pentagon before it goes out. Right now, due to COVID staffing, that process is backlogged 6-12 months.

I have spent most of my career in a quiet, weird corner of Special Operations that a good chunk of the U.S. Army doesn’t even know exists. (“We DO that?” is the most common question I’m asked when I tell other soldiers what my job is. “Are you hiring?” is the second. I could do Federal time for even mentioning the acronym of the operation my team currently supports.)

This is important because I have seen, firsthand, everything you’d need to clandestinely explore another world. I shit you not. I could write the CONOP in 96 hours.

If you wanted to stage a series of Special Operations missions to explore a fantasy world through a portal found on U.S. soil, Stonelands is exactly what it would look like. The chain of command, policies, procedures, logistics and support requirements, cover stories, legal complications, mission design, personnel selection, tradecraft, briefings, team dynamics, paperwork hassles—everything—is exactly the way it would look and function. These procedural points, right down to the moments of bureaucratic inertia, are integral to the plot.

I casually asked my unit’s Security Officer if I’d be allowed to publish a novel laying out exactly how we would pull off a mission like this, and he lost his shit. This is why the manuscript is now at the Pentagon.

Stonelands takes the technothriller elements of Dragon’s Trail and The New Magic and volleys them right back at a contemporary military story. It also takes the suspension of disbelief I built in Dragon’s Trail and The New Magic and launches it into the realm of plausibility, alien conspiracies, and We-Can-Neither-Confirm-Nor-Deny. You will walk away from Stonelands either wondering if it’s happening right now, or wondering why it isn’t.

Because Dragon’s Trail did so well (and, frankly, The New Magic’s receipts are nothing to blow your nose on), I now have a literary agent. She will be shopping Stonelands for a trade-pub deal. You may not see it for a few years, but know this book is coming, and it’s going to be spectacular.

After Christmas, probably this weekend, I’ll get back on the finale to The Outworlders. I hope to have that out by the end of 2021. I’m aiming to have it off to editing right around the time Stonelands comes back from review.

The next book after Coin of the Realm (still undecided on the title; I’m currently toying with calling it By The Sword) will be a prequel, working title Birthright, King Ulo Sabbaghian’s origin story as a lost prince raised on Earth who wins back his father’s fantasy kingdom and comes into his own in a land of magic and wonder. It’s gonna bend the shit out of some good old-fashioned fantasy tropes. It’ll be fun. By the time they’re both finished, Stonelands will be out, one way or another.