On Process: The Fortress of Solitude 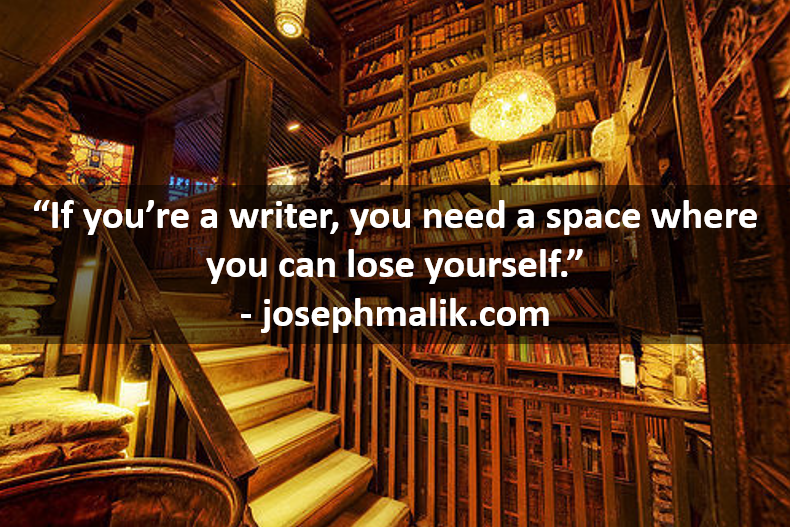 I’m probably about to get controversial, again. Pour yourselves a drink. Last one in, watch the door. 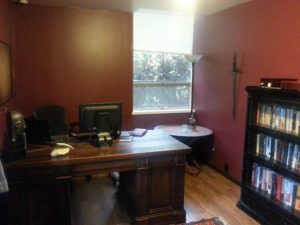 Pull up a chair. Grab something sharp.

I want to talk today about writing spaces. Primarily, because I just finished building mine, and goddammit, it’s amazing.

We had a spare room behind the garage, and for some time, it looked like this: 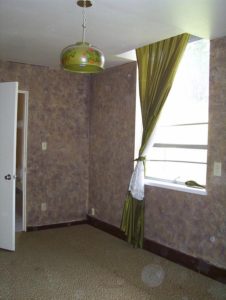 “You’re supposed to paint the walls in a neutral color. Not every neutral color.” – Michael “Tinker” Pearce, seeing the room before renovation.

The house was originally an old equipment barn that had been half-assedly renovated in the 1970’s, and which we converted into something more or less resembling  a Tuscan or Provençal retreat. This took the better part of a year, and about five square yards of knuckle skin.

Equity, hell. After all that, I plan to die here.

However, the small room stayed unused for about ten years. I wrote the final draft of Dragon’s Trail and the first three and a half drafts of The New Magic in a converted spare bedroom upstairs. Which was not a bad arrangement. 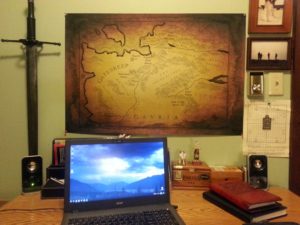 Earlier this fall, we went over the receipts for Dragon’s Trail, and after chewing our pencils for awhile, we tackled the spare room. The carpet came up, the curtains came down, that fucking light fixture was taken out back and shot, and we turned the room into my Fortress of Solitude, which is like a Man Cave, except there’s no TV or fridge. In the civilized days of yore, such a place was called a study.

A can of $5 mistint from Home Depot had taken care of the walls some years before–seriously, something had to be done– and a few weeks ago we laid a hickory laminate floor, put up new drapes, and then added The Desk, which had been sitting in our living room like the wreck of the Edmund Fitzgerald while we worked on the Fortress of Solitude. 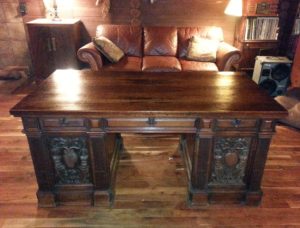 The Desk has a history all of its own that I won’t get into here, but the short of it is, it’s a family heirloom from the Georgian era and it’s seen some shit. As anyone who helped move it will attest, the wood is impregnated with depleted uranium; we estimate that it weighs just north of nine thousand pounds. So, we got it into the room, added a few fight-y things I’ve collected through the years . . . 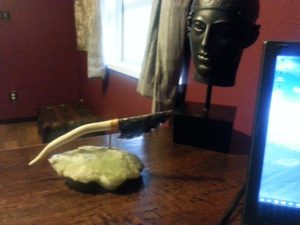 I’m seriously hoping someone breaks into this room while I’m in it, for no other reason than the resulting paperwork will keep the police entertained for weeks. Sir Javal looks on approvingly. 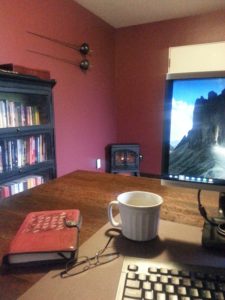 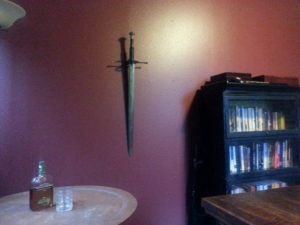 Mr. Snappy. The bookcase belonged to my grandfather.

I keep my beat sheets and flowcharts in a leather-bound journal that doubles as my series bible. My process is still pretty old-school; most of my concepting is done using blank books and a Zebra F701 hacked to take a gel insert. My laptop is the same one that I did the initial rewrites of Dragon’s Trail on back in 2012–too old and slow for gaming and it sucks at the Internet, which limits distractions–with the addition of a mechanical keyboard and a second monitor. The desk drawers, along with an iron-banded trunk, are full of notebooks, photos, and old manuscripts from over a decade of research when I was learning everything I needed to know to bring these books to life, from Italian rapier to stunts on horseback. We topped it off with my Aeron chair–because if the writing chair is the most comfortable chair in the house, your ass will seek it out, and the next thing you know, your ass is at your desk and you’re writing–and then we framed the wall map of the Western World from my old office upstairs and hung it above the desk for quick reference and that was pretty much it.

Where the magic happens.

And here’s where it gets controversial: I know that leading minds tell us to not build writing rooms, and Stephen King has his famous piece about The Desk, and that’s great for them. Whatever works.

Me, I need this. There is very little in this room to remind me of where I am, aside from my computer and the music playing. (As long as we’re talking process, I’m writing this final draft of The New Magic to a Spotify channel I’ve built that’s mostly Gothic Country, and if you don’t know what that is, you should. Start with Blues Saraceno’s “Dogs of War,” which I envision as the title theme were The Outworlders to become a Netflix series, and follow it up with Lizzie No’s extraordinary “Crying Wolf.”) It’s quiet as a tomb, there is very little that’s new or slick or modern; it has the feel that you could be anywhere, at any time.

Importantly, and I just noticed this as I’m sitting here looking around, everything in this room has a story. Everything. I’m surrounded by stories. (Technically, we all are; I just know these ones, already.)

The windows face nothing modern: no power lines, no houses. There is no clock. And what I’m getting at is, if you’re a writer, you need a space where you can lose yourself. Your couch, Starbucks, in your cubicle with noise-cancelling headphones because you have no more fucks to give and dammit, you’re going to be a writer if it kills you. Someplace where you can go into your work and stay for a while.

My productivity has skyrocketed–enough that I can take a couple of hours this morning to punch out a new blog post–and I can hear my characters talk for the first time in a year. More than that, though, when I’m in this room, I’m writing. When I leave, I turn off the lights and the fireplace, lock up, and re-enter the house and the modern world. I am done at that point. As a result, my time with my family has become immensely more valuable; I’m not daydreaming or doodling or sitting next to my wife on the couch and typing and giving the world half-attention. Perhaps most of all, writing finally feels like a job. I’m exceptionally happy in here, working at writing. Kudos to my understanding and amazing wife, and top marks to her skills with a tape measure and a notepad.