Don’t Try This At Home. No, Seriously. 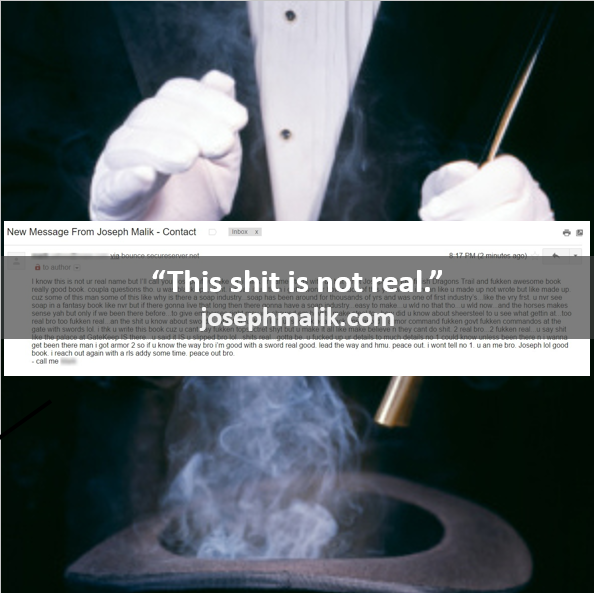 I’m going to do something that I usually don’t do. I’m going to write a blog post that is not intended to stir anyone up or piss anyone off. This is serious time, now.

By which I mean, this shit is not real.

I’ve received two reviews and three messages in the past three months mentioning the possibility that I have been to the world in my series, myself. One was a rather strident and rambling email last month which I was ready to write off as a troll, untiI got another a couple of weeks ago, just about as unbalanced, and then a third this morning, much more reasoned and subtle. And apparently serious and wanting me to write them back with ideas on how to find these places.

Three months, people. I have every intention of this book becoming much bigger than it is right now — and Dragon’s Trail is starting to get reviews from people who don’t like this kind of story, which means it’s getting loose in the wild and away from its intended readership — so let’s just get this out of the way.

This shit is not real.

I did a few writing tricks when I wrote Dragon’s Trail, and I did them on purpose, to make it seem more realistic. I know this is the magician revealing his secrets, but frankly, I didn’t think it would work this well, and a few of you are starting to worry me. Plus, I’m going off the grid for a while here, shortly, and I don’t want this to get out of hand. I’ll have enough to worry about.

First, the series is written in omniscient, from the POV of a fictional narrator who has been told the story by the characters. I did that intentionally. If you go back and deconstruct the POV, you’ll see that it’s being told to you by someone from Earth who knows the characters. Sometimes he’s telling you what the characters thought, and sometimes he’s explaining it to you in terms you’ll understand. I did this specifically with the calculated intent of making it seem like the author has been there. Ask my editor; we fought about this. I’ll admit it’s a neat trick, and it only took about twenty years to dial in. Omniscient is really powerful but really hard, which is why it has fallen out of favor.

Second, I intentionally slip into present tense during expository passages. I use present tense to describe things in this other world that are still standing, or processes that they use, or cultural norms, giving the impression that this is happening right now, and that you could go and see for yourself if you only knew the way. So far, nobody’s mentioned it — the avalanche of present-tense fantasy novels out there likely made this one slip by unnoticed — but it’s there. Read it again. I didn’t invent this; technothrillers — and Dragon’s Trail is a technothriller, just a Vendel-age technothriller — do it all the time.

Third, when I describe something on Earth or from Earth that you, dear reader, are familiar with, there’s often a parallel construction somewhere else in the book describing an aspect of the fantasy world and using the same cadence. It may be several chapters earlier or later, but it’s in there. Your subconscious picks up on this. It’s music; it’s a refrain. You can’t not hear it.

Lastly, and I’ve covered this before, I learned all of the details in the book — the details that I “could only know if (sic) been there” — by going out and doing it, myself. Right here on Earth. For about thirty years. Three decades of fencing, blacksmithing, horseback riding, studying martial arts, and skulking about at Renfaires, coupled with a childhood spent in the woods tracking and killing things, followed by an early career as a stunt man and then a stint in a quiet, weird corner of the military. I worked on some bizarre shit in the military, but I was not part of a Black Ops program guarding a Stargate-like portal to Gateskeep. Pinky swearsies.

I’m coming clean because, seriously guys, I don’t want to end up with readers emailing me saying they’ll kill themselves if I don’t tell them how to get to Falconsrealm, nor do I want to end up chained to a pipe in a basement with some idiot holding a blowtorch and demanding that I tell his LARP group how to find the portal. It’s better for everyone this way, trust me; you don’t want to be the guy who does that to me.